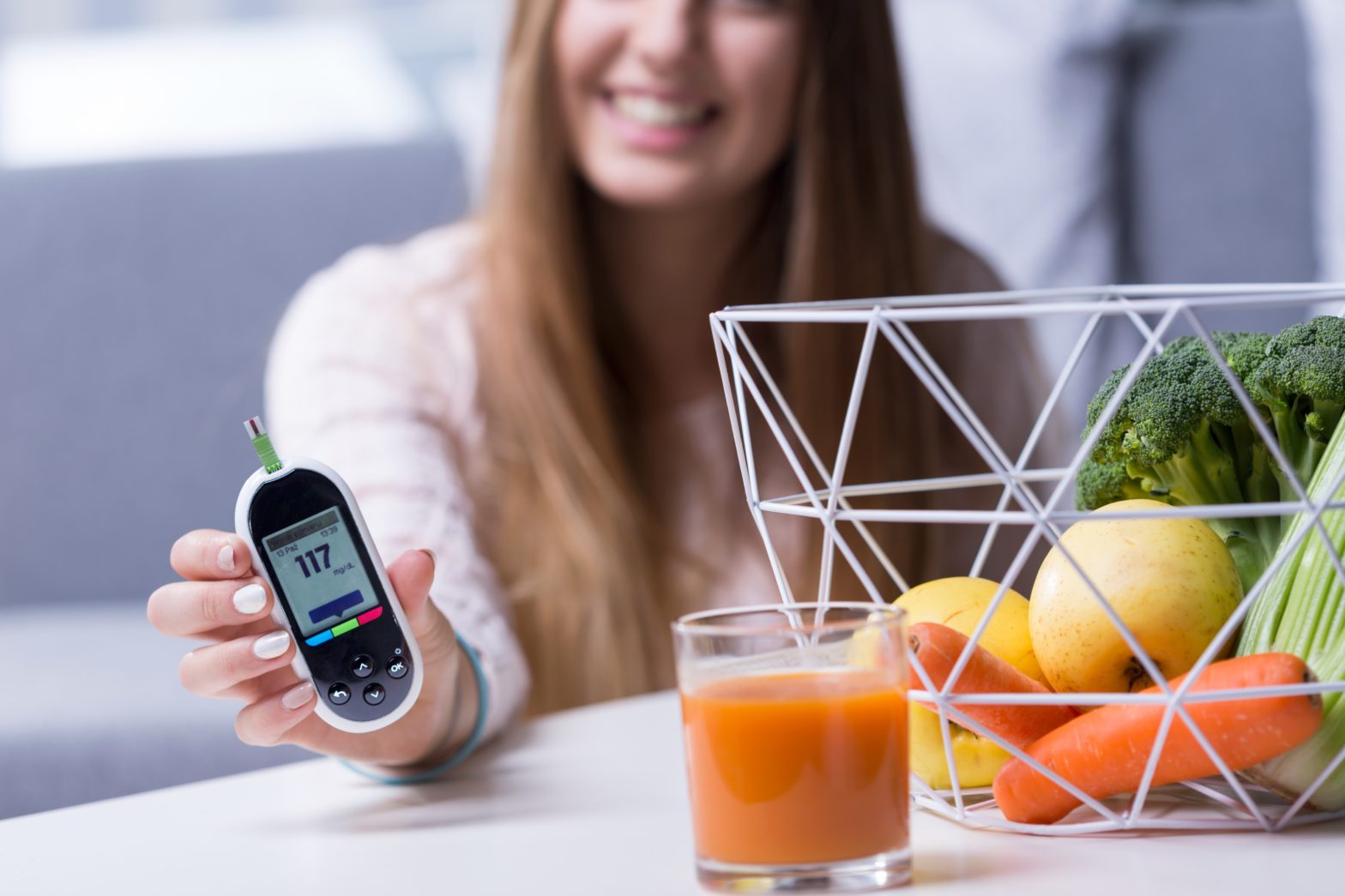 C-peptide is a good indicator of how much insulin the body is making. It can be used to differentiate between type 1 and type 2 diabetes. While moderate levels lower inflammation, even slightly higher levels have been linked to insulin resistance, metabolic syndrome, heart disease, and cancer. Read on to learn more about C-peptide and how it can impact your health.

You probably already know about insulin, the hormone that decreases blood sugar levels. Insulin’s main function is to transport sugar (glucose) from the blood into your cells and tissues. There, glucose can be converted into energy or stored for future use.

The pancreas makes insulin, but not directly. The beta cells in the pancreas first produce a protein called “proinsulin.” Each proinsulin breaks down to one molecule of insulin and one molecule of C–peptide. Both are released when blood sugar levels get high [1, 2].

Insulin and C-peptide are released in equal amounts but broken down differently. The liver breaks down insulin at a variable rate, while the kidneys break down C-peptide at a fairly steady rate. This makes C–peptide a more reliable measure of insulin production and beta cell (pancreas) function [1, 2].

C-peptide was initially considered inactive – a mere byproduct of insulin production. But studies revealed that this peptide actually has both anti-inflammatory and pro-inflammatory effects in the body, depending on its levels [3, 4, 5].

In a nutshell, you’d usually want C–peptide (and insulin production) to be balanced – neither too high nor too low.

In diabetics, on the other hand, C-peptide declines over time [2].

Blood C-peptide is a better, more accurate marker than urine C-peptide. Urine levels still offer some advantages. For one, they are less invasive and can be done more frequently. Additionally, they can be used in women with gestational diabetes (diabetes in pregnancy) and in type 1 diabetics with unstable blood sugar levels [8, 9, 10, 11].

If your C-peptide levels are low, that may mean your pancreas isn’t working properly and the body is not making enough insulin [2]. Your doctor will interpret this test, taking into account your medical history, signs and symptoms, and other test results.

Low C-peptide can be caused by:

These causes have been associated with low C-peptide levels. Work with your doctor or another health care professional to get an accurate diagnosis.

Low C-peptide is most often found in people with type 1 diabetes, who may experience the following symptoms [23]:

In type 1 diabetes, C-peptide is beneficial because it signals some insulin-producing pancreas cells still exist. Type 1 diabetics who have detectable C-peptide levels require less insulin and are not as prone to chronic complications, such as heart disease and kidney, nerve, and eye damage [25, 26, 27].

In fact, studies have shown that adding C-peptide to insulin therapy can improve nerve pain, heart, and kidney function in people with type 1 diabetes [28, 29, 30, 31].

This effect may be due to the anti-inflammatory effects of C-peptide. In animals with autoimmune diabetes, C-peptide decreased inflammation (NF-κB, TNF-alpha, IL-1b, IL-2, and IL-6), protected blood vessels from inflammation, and preserved cognitive function [31].

C-peptide injections improved the survival rate of the mice with sepsis, a severe inflammatory response to bloodstream infection [32].

However, these effects are limited to low-normal C-peptide levels. In excess, C-peptide likely worsens inflammation [31].

Low C-peptide levels may be linked with lower bone density and osteoporosis [33].

Osteoporosis and low bone mineral density are common in people with type 1 diabetes [33].

In a study with 84 postmenopausal women without diabetes, women with lower C-peptide levels tended to have lower bone mineral density [34].

In another similar group of 133 postmenopausal women, low C-peptide levels were linked with a higher risk of fractures [35].

High C-peptide levels indicate that the body is producing too much insulin [36, 37].

Causes shown below are commonly associated with high C-peptide. Work with your doctor or another health care professional to get an accurate diagnosis. Your doctor will interpret this test, taking into account your medical history, signs and symptoms, and other test results.

High C-peptide levels can be caused by:

Drugs that can increase C-peptide levels include:

You can have insulin resistance and elevated C-peptide levels without experiencing any particular symptoms.

You may, however, experience signs and symptoms associated with underlying conditions, such as weight gain (especially belly fat), inflammation, high uric acid, or high blood cholesterol and triglyceride levels – to name a few [52].

Higher fasting C-peptide means that the body is producing too much insulin. This happens in insulin resistance, when the body is struggling to keep blood sugar levels at bay. Pancreas increases insulin production in response to higher blood sugar, but the tissues protest – they don’t respond to insulin and become “resistant.”

Studies have found that high C-peptide levels can predict insulin resistance in both healthy people and those with diabetes [53, 54].

Metabolic syndrome is a group of health problems that often occur together and increase one’s risk of type 2 diabetes and heart disease. You have metabolic syndrome if you have 3 or more of the following [55, 56, 57]:

Another study confirmed the findings: higher C-peptide levels were associated with metabolic syndrome in 77 diabetic patients [59].

Finally, higher C-peptide levels were linked with lower HDL cholesterol levels in a study of over 13k people [60].

3) Hardening of the Arteries and Heart Disease

C-peptide may contribute to the onset of the hardening of the arteries. It deposits in blood vessel walls where it increases local inflammation [61, 62].

In an initial study in 54 patients with rheumatoid arthritis, those with higher C-peptide levels had more artery calcification–a buildup of calcium in the arteries that narrows and stiffens them [63].

In almost 7k adults, those with higher C-peptide levels were more likely to suffer a heart attack and develop heart disease over 3.5 years of follow-up [64].

In addition, higher C-peptide levels were associated with lower HDL cholesterol (“good cholesterol”) levels in a study of over 13k people. A low HDL cholesterol is a well-known risk factor for heart disease [60].

In a meta-analysis of 9 studies with over 7k people, those with higher C-peptide levels had a 37% higher risk of colon cancer [65].

What’s more, higher C-peptide was linked with a 50% higher risk of invasive breast cancer in over 2.7k women [66].

In another 1k people, higher C-peptide levels were associated with a higher risk of gastric cancer [67].

In a similar study of about 5k people, higher C-peptide levels were linked with a 72% higher risk of all-cause mortality and a 60% higher risk of dying of heart disease [70].

Finally, in 399 patients with newly diagnosed diabetes, the highest C-peptide levels were linked with a 2.75-fold higher risk of death from all causes [71].

We go over lifestyle and dietary modifications that can help improve C peptide levels in this post.

C-peptide points to how well the pancreas is working. Doctors often use it to measure the amount of insulin made in the body, to differentiate between type1 and type 2 diabetes, or to adjust the dose of insulin given as medication. They can also use it to investigate the reason for low blood sugar or to help diagnose a pancreatic tumor.