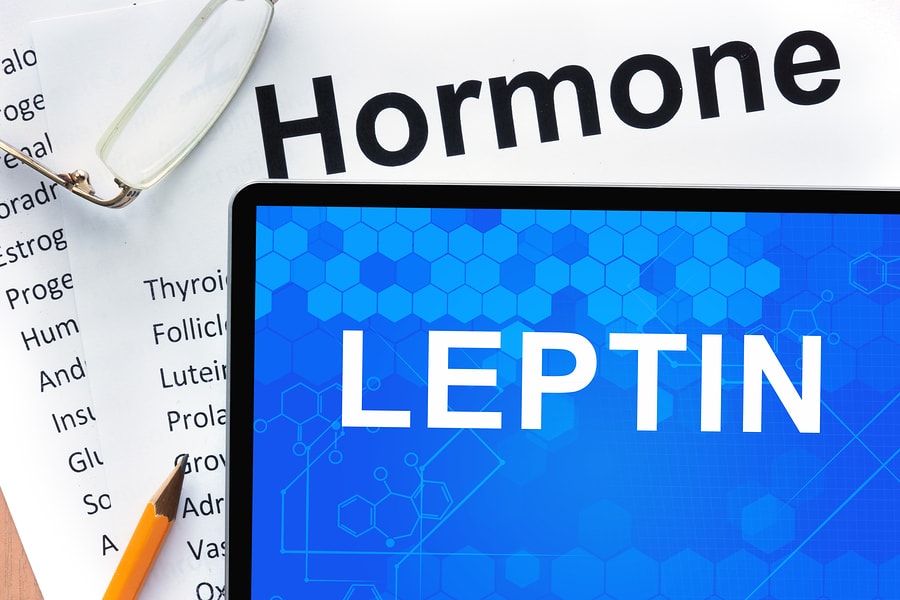 Low levels of the satiety hormone leptin have been linked with poor memory, anorexia, depression, and frequent infections. Read on to learn about the causes and symptoms of leptin deficiency and factors that increase and normalize it.

Leptin is a satiety hormone that promotes weight loss. It is produced by the body’s fat cells [1].

When a person eats enough food, leptin is released into the bloodstream, where it travels to the brain, signaling that they are full and that can burn calories at a normal rate [2, 3, 4].

To learn more about normal leptin levels and what this hormone does in the body, read the first part of this series.

This post will focus on the dangers of high leptin. Elevated leptin levels are associated with obesity, overeating, and inflammation-related diseases, including high blood pressure, metabolic syndrome, and heart disease [5].

To recap, leptin is one of the big 4 hormones that determine weight. It is made in fat tissue, while receptors for it are dense in two important brain regions (the hypothalamus and hippocampus) [6].

Leptin acts as a signal to the brain to inhibit food intake and enable the storage of surplus calories (in fat cells).

At the same time, it protects non-fatty tissue from fat overload. Increased leptin is associated with higher body fat mass, a larger size of individual fat cells, overeating, and excessive hunger. In rodents, it increases energy expenditure by using brown fat for energy [7].

Low leptin levels have been associated with:

Leptin deficiency can also be caused by disorders such as:

If you believe that your leptin system is dysfunctional, talk to your doctor about any underlying conditions or factors that may be at the root.

Symptoms of low leptin levels vary depending on the underlying cause. The following symptoms have been associated with low leptin [17, 18, 19, 20]:

These symptoms may also be associated with a different underlying condition. Again, the most important thing is to talk to your doctor for an accurate diagnosis and appropriate treatment or management plan.

Recent studies suggest that leptin may have antidepressant and anti-anxiety properties. In rat models of depression and anxiety, leptin levels are low. When given leptin, symptoms improve [21].

On the other hand, Ghrelin, the hunger hormone, causes anxiety and depression [21], which may lead to feeling ‘hangry’ (hungry and angry).

Depression and anxiety are common in women with anorexia nervosa (AN), an illness associated with low leptin and increased ghrelin [21].

Similarly, there is an increased prevalence of depression and anxiety in normal-weight women with functional hypothalamic amenorrhea (HA), a disorder also characterized by low leptin and high ghrelin [21].

Recently, obesity has been linked to an increased risk of depression and anxiety [21], which can result from leptin resistance. High leptin levels were associated with lower depression scores [21].

Leptin’s anti-anxiety effects are mediated in part by its actions in the Prefrontal cortex (PFC), the ventral tegmental area (VTA) and substantia nigra (SN) [21]. Leptin also reduces anxiety by inhibiting orexin A in the suprachiasmatic nucleus (SCN) [22].

Leptin may help the body get into ketosis. Leptin-deficient mice do not get into ketosis well and have a defective response to the ketogenic diet (no increase in liver FGF21) [23].

It might improve mitochondrial function (by increasing hsp60), which decreases insulin resistance [24].

Leptin is believed to have some positive effects on cognitive function. Like BDNF, leptin facilitates synaptic plasticity in the hippocampus [6] and long-term potentiation (LTP) [6], processes that are critical for memory.

Animal models of Alzheimer’s disease have shown that chronic administration of leptin can be beneficial for the condition and improve cognitive performance, by reducing b-amyloid and Tau proteins, two hallmarks of Alzheimer’s pathology [26, 27].

Leptin is believed to restore fertility and may improve bone health in lean women [28].

Women with extremely low body fat, including runners and dancers, as well as women with eating disorders, are prone to develop hypothalamic amenorrhea (HA), a condition in which their menstrual periods cease, triggering serious problems such as infertility and osteoporosis [28].

Treatment with a synthetic form of leptin can restore fertility and reduce the risk of bone fractures in this group of patients [28]. This is believed to be one reason why during fasting or starvation, fertility declines [28].

It has been shown that conditions of reduced leptin production are associated with increased infection susceptibility [32].

The decline of leptin during fasting is one of the main mechanisms by which fasting may suppress the immune system [32].

It also activates NK cells indirectly by increasing IL-1, IL-6, and TNF – by monocytes and macrophages [36].

Leptin has been observed to improve insulin sensitivity (by way of MC4R) [37].

Humans born with a genetic leptin deficiency are profoundly obese, have high insulin and high cholesterol [38].

Leptin is secreted by the stomach and enters the small intestine. Once it reaches the intestines, leptin can interfere with the absorption of some nutrients. For example, it enhances butyrate [39], fructose [40] and oligopeptide uptake [41].

On the other hand, it decreases glucose [42] and galactose uptake [43]. It also inhibited the absorption of several amino acids, including Proline, Beta-Alanine, and Glutamine [44].

I could see this being both bad and good. By blocking the absorption of glucose and amino acids, it can help weight loss.

However, blocking glucose uptake gives a better chance for SIBO to arise or for malnutrition from not absorbing amino acids.

Leptin leads to the production of VIP, the anti-inflammatory hormone (synergistically with TGF-beta). VIP has mixed effects on weight, however. Although it blocks appetite, its net effect may be to promote obesity [45].

Various factors increase leptin, but many of them are unhealthy. An example of an unhealthy factor that raises leptin is stress. Obesity and sleep apnea also increase leptin [46, 47, 48]

Leptin is mainly increased after meals, more by carbohydrates than by fat in both obese and healthy people [50, 51].

On the other hand, sleep deprivation can decrease leptin [16]

One of the first steps in improving anyone’s health is to make sure they’re getting enough sleep. This is a good place to start for the leptin system as well.

Estrogen increases leptin. This is usually bad, since excess estrogens have been linked to leptin resistance. However, if you are in menopause, maintaining estrogen activity might help balance your leptin levels. If you are concerned about your estrogen levels, work with a physician to make sure your hormones are balanced [55]

Leptin increases 4 – 6 hours after meals in response to insulin secretion. Check your insulin and glucose levels to make sure they are in the normal range. If you are at risk of disrupted insulin regulation, talk to your doctor about potential solutions [56].

Glucosamine (and hexosamines) increased leptin in pancreatic beta-cells [59]. There is not enough evidence to recommend glucosamine for increasing leptin in humans, however.