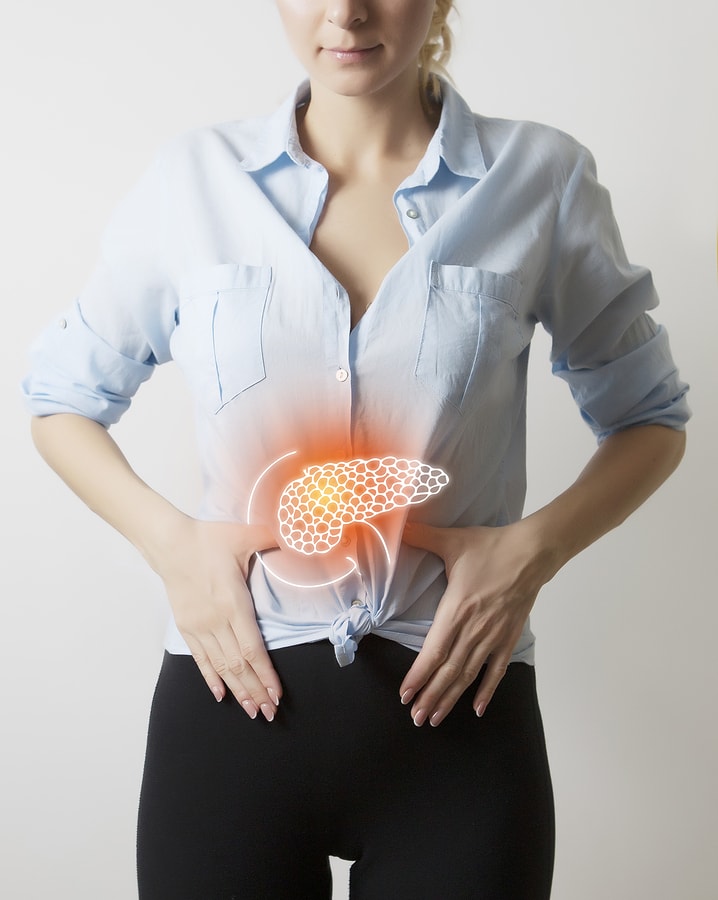 Lipase is a digestive enzyme released by the pancreas into the gut to break down fats. Lipase blood levels can increase due to pancreas inflammation or damage. Learn more about the lipase test, what abnormal levels mean, as well as how blocking pancreatic lipase may help combat obesity.

Lipase is an enzyme that breaks down fats (lipids) into smaller molecules. In the gut, lipase enzymes are crucial for digestion, transport, and use of dietary fats and oils [1].

Although there are various kinds of lipases, pancreatic lipase is the most important one.

It’s the main source of lipase in the gut, produced and released by the pancreas – the same gland that makes insulin. After a meal, your pancreas releases pancreatic lipase into your digestive tract, where it breaks down triglycerides from oils into smaller molecules that are easier to absorb (monoglycerides and fatty acids) [2].

Apart from the pancreas, lipases are also produced in the liver (hepatic lipase), blood vessel lining (endothelial lipase), and other tissues such as the muscles, heart, brain, and fat tissues (lipoprotein lipase) [3, 4, 5].

This article will focus on the main, pancreatic lipase: what it means when its levels are abnormal, how this affects weight loss, and ways to decrease high levels of this enzyme.

A lipase test measures the levels of lipase in your blood. When the pancreas is inflamed or injured, it releases more lipase than usual, which reaches the blood and builds up. Under normal conditions, not much of this enzyme makes it into the blood from the gut.

If you have these symptoms, your pancreas may be inflamed or injured and you should see a doctor as soon as possible!

You may be at risk for pancreatitis if you:

The normal range for a blood lipase test varies slightly between laboratories. Usually, it’s between 12 and 70 U/L (units per liter).

Overall, lipase is most often elevated due to pancreas inflammation (pancreatitis). But it can also be increased due to other underlying conditions that inflame the pancreas (such as gallstones or gut issues) or issues unrelated to pancreatic health, such as kidney disease [20].

Causes given below are commonly associated with high lipase levels. Work with your doctor or another health care professional to get an accurate diagnosis. Your doctor will interpret your lipase levels, taking into account your medical history, symptoms, and other test results.

Lipase can also increase in some rare diseases, such as:

Some drugs can increase lipase blood levels, including:

High lipase levels are linked to many serious and life-threatening conditions. If your levels are high, see a doctor as soon as possible. Your doctor will run follow-up tests to discover the underlying cause and prescribe appropriate treatment.

Low levels of lipase can mean that your pancreas is not functioning well and is struggling to produce digestive enzymes.

Some conditions that can increase lipase can sometimes also decrease this enzyme.

Causes below are commonly associated with low lipase levels. Work with your doctor or another health care professional to get an accurate diagnosis. Your doctor will interpret your lipase levels, taking into account your medical history, symptoms, and other test results.

Low levels (close to 0) can be found in:

If you suspect that you have low lipase or digestive enzymes, see your doctor. The most important thing is to work with your doctor to find out what’s causing your low lipase and to treat any underlying conditions!

To lower high lipase, you need to work with your doctor to address the underlying issue triggering the lipase increase. This is most often pancreas inflammation. An inflamed pancreas is a serious condition that requires immediate medical attention – your doctor will diagnose the problem and prescribe appropriate treatment.

Other than that, when your lipase is high you should:

Pancreatic lipase breaks down fats in the gut, which helps the body absorb and use them. Researchers have found that blocking the pancreatic lipase can reduce fat absorption, which aids weight loss [2].

According to a meta-analysis of 33 studies (and almost 10k people), orlistat reduces body weight, blood cholesterol, and triglyceride levels [50].

Drugs that block the pancreatic lipase are relatively safe, but can still cause side effects.

Blocking the pancreatic lipase increases the absorption of oxalates, raising the risk of kidney stones [51].

Drugs that block lipase can also hinder the absorption of fat-soluble vitamins. Orlistat combined with a multivitamin reduced vitamin E absorption, and levels of vitamin D and vitamin K in a study of 17 people. Orlistat can also cause other side effects, such as oily stools, diarrhea, stomach pain, and liver damage in rare cases [52, 53].

Many plants and their compounds are being studied for their ability to block pancreatic lipase and boost weight loss [54]. Foods and herbal alternatives are generally safe when used sparingly and may help mildly lower lipase levels. These include the following:

Most of these foods, herbs, and spices are also excellent antioxidants that may help lower inflammation and improve general well-being.