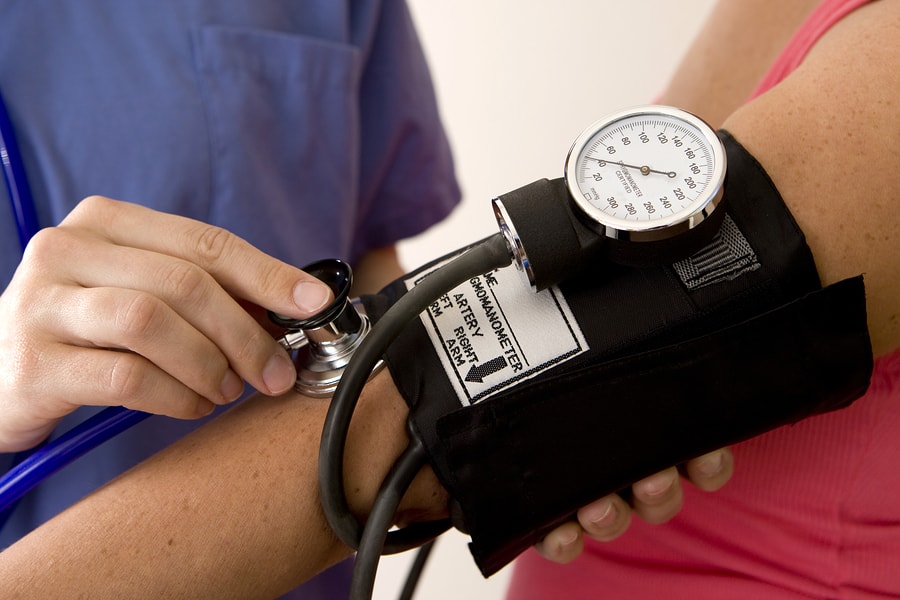 Our bodies maintain a delicate balance with blood pressure in order to deliver appropriate amounts of oxygen and nutrients to every cell in the body. Because we are regularly flooding our blood with chemicals that shift this balance, the control is dynamic [1, 2].

One way the body exerts this control is through renin, an enzyme responsible for initiating a cascade of events in response to low blood pressure. These events are collectively known as the renin-angiotensin system (RAS) [1, 2].

Renin is mainly produced by special cells in the kidney (juxtaglomerular cells) in response to [3]:

When renin is released by the kidneys into the bloodstream, it converts angiotensinogen, a protein produced by the liver, into angiotensin I [5, 3].

Angiotensin II causes blood vessels to constrict and stimulates the production of aldosterone, a hormone that signals kidneys to retain salt and water. Overall, this helps raise blood pressure and blood volume and maintain normal sodium and potassium levels [5, 3].

However, if this process gets out of balance, blood pressure can get too high. Since renin and aldosterone are closely related, they are often tested together in people with high blood pressure to identify the cause of abnormal aldosterone levels [3].

The renin-angiotensin system is also involved in red blood cell production and abnormal thickening of the heart muscle (hypertrophy) [6].

Another method is measuring plasma renin concentration (PRC, pg/ml). Compared to PRA, PRC is faster, easier to perform, and reproducible. However, unlike PRA, it is not sensitive in measuring low levels of renin [8+, 9+].

Because renin release is controlled by multiple variables, a number of factors can affect the interpretation of your results, including [10, 11+, 12+]:

Some lab-to-lab variability occurs due to differences in equipment, techniques, and chemicals used. Don’t panic if your result is slightly out of range — as long as it’s in the normal range based on the laboratory that did the testing, your value is normal.

Causes shown here are commonly associated with low renin. Work with your doctor or other health care professional for an accurate diagnosis.

Blood renin levels fall by 17% each decade. This may be a result of age-related structural changes in the kidneys and decreased renin production [1, 7, 13, 14].

Low plasma renin activity is common in younger people of African descent, which is attributed to reduced renin production. However, the exact mechanisms are unclear [7, 15+].

4) Too Much Fluid in the Blood

Renin levels are reduced in approximately a quarter of patients with essential hypertension. This is thought to be due to higher blood pressure at the cells that produce renin (juxtaglomerular cells), which suppresses renin release [7].

Conditions that lead to kidney cell (nephron) loss and dysfunction can lead to low renin and aldosterone levels. These include [7]:

Blood renin activity levels were lower in 15 people with hypothyroidism compared to healthy people. Scientists believe this may be a result of decreased renin production, in part owing to decreased sympathetic activity in the kidney (i.e. b-adrenergic activity) [20+, 21+].

Additionally, some scientists think this might explain why hypothyroid patients typically have excess fluid buildup in tissues, resulting in edema (swelling) [21+].

Low renin activity in hypothyroidism may also shed light on why some hypothyroid patients experience hypertension [21+, 7].

Primary hyperaldosteronism is when the adrenal glands release too much aldosterone (hyperaldosteronism), resulting in increased potassium loss and sodium retention. In turn, the excess sodium holds on to water, thereby increasing blood volume and pressure [7].

Over time, the increase in blood volume and pressure suppresses renin production. For this reason, people with primary hyperaldosteronism generally have very low renin levels as well as high aldosterone levels. They often also have low potassium levels [7, 23].

The most common causes of primary hyperaldosteronism are [24+]:

Low renin levels differentiate primary (i.e. due to a problem of the adrenal glands themselves) from secondary (i.e. indirect) causes of hyperaldosteronism [7].

Normally, a high-salt diet suppresses renin production. However, in 40-50% of people with primary hypertension, increasing salt intake does not sufficiently reduce renin production. This leads to higher blood pressure when salt is consumed [27+, 5].

Salt-sensitive hypertension is usually associated with impaired kidney function, which results in the failure of the kidneys to properly excrete sodium and water [27+, 5].

Research suggests that many other factors may influence how blood pressure responds to salt, including [14, 5, 26]:

For these people, reducing salt intake is considered to be effective in lowering blood pressure [28].

One study (n=19) found that plasma renin activity levels were suppressed in more than half of people with Cushing syndrome due to adrenal hyperplasia (overactive adrenal glands) [29].

In a case study of a man who consumed excess licorice daily for 4-5 years with high blood pressure, increased sodium and water retention, and low potassium levels, discontinuing licorice intake cured his condition [31+].

Have in mind that these negative effects on the heart are due to a compound in licorice called glycyrrhizin. Deglycyrrhizinated licorice supplements (DGL) shouldn’t carry this risk as glycyrrhizin has been removed from them [32].

Drugs that may decrease renin activity levels include [7, 33+]:

Please discuss your medications with your doctor.

Symptoms depend on the underlying cause of low renin activity.

Possible signs and symptoms of excess aldosterone include [7, 34]:

A meta-analysis of seven studies with 29k patients found a significant association between anemia and the use of drugs that block the renin-angiotensin system. These drugs are usually prescribed to manage high blood pressure. In the study [35, 6]:

Also, people with mutations in the gene encoding renin (REN) that result in low renin levels typically suffer from anemia in childhood. The reason for this is unknown, however, the role of renin and the RAS in red blood cell production is thought to play a role [36].

More research on this association is needed.

If you have low renin levels, your doctor will recommend treatment and monitoring based on the underlying cause.

For example, the following conditions must be resolved in order to normalize renin levels:

Once the underlying cause of low levels is under control, you may talk to your healthcare provider about lifestyle changes and complementary approaches that may help.

Below are some approaches to bring up with your doctor. These are typically recommended to people with low renin and high blood pressure.

You may try the diet- and lifestyle-based interventions discussed below if you and your doctor determine that they could be appropriate.

Remember that these complementary approaches should ever be done in place of what your doctor recommends or prescribes.

For People with High Blood Pressure

The following have been shown to lower blood pressure in humans.

Cutting back on salt is also beneficial for salt-sensitive people, whose blood pressure rises in response to salt intake [28].

However, limiting sodium too much can be harmful. In a meta-analysis of 58 studies, drastic sodium restriction led to an increase in LDL (“bad”) cholesterol without a boost in HDL cholesterol, although the same people had a 3.6 times increase in renin levels [44+].

Since sodium is lost through sweat, people engaged in extreme physical exercise or exposed to heat should avoid over-restricting their sodium intake [45+, 46].

The following genetic conditions are associated with low renin levels.

It’s important to note that just because certain genotypes are associated with a disease, it doesn’t necessarily mean that everyone with that genotype will actually develop the disease!

Many different factors, including other genetic and environmental factors, can influence the risk of abnormal renin levels.

Mutations in the gene that codes for renin (REN) that result in low renin levels are a cause of a rare inherited kidney disease that affects the tubules of the kidneys known as autosomal dominant tubulointerstitial kidney disease (ADTKD) [36].

Many people with this disease typically suffer from anemia in childhood. Often, their blood potassium and uric acid levels are mildly elevated [36].

As the condition progresses, the kidneys lose their ability to filter waste products from the body, resulting in kidney failure. Affected people eventually require dialysis (to remove wastes from the blood) or a kidney transplant in the later stages of the disease [47, 36].

In the kidneys, the proteins WNK1 and WNK4 activate the electrolyte transporters Na+/C- cotransporter (NCC) and Na+/K+/2Cl- cotransporters 1 and 2 (NKCC1 and NKCC2), thus causing the increased intake of sodium, chloride, and potassium. Additionally, the proteins KLHL3 and CUL3 form a complex that binds to WNK4 and breaks it down, thus decreasing the absorption of these electrolytes. Mutations in all these proteins can cause Gordon’s syndrome [48+, 49+, 50+, 51+].

Liddle’s syndrome is a rare genetic disorder in which the collecting tubules of the kidneys retain too much sodium and water, thereby causing low renin levels and high blood pressure [10].

People with Liddle’s syndrome generally have [10, 52]:

The AME syndrome is a genetic disorder that is caused by the deficiency of an enzyme (11-beta-HSD2), resulting in excess cortisol levels. In turn, excess cortisol binds to receptors in the kidney (mineralocorticoid receptors), which leads to potassium excretion and sodium and water retention. Overall, this leads to decreased renin levels [7].

Mutations in the CYP17A1 and CYP11B1 genes that cause deficiencies in the enzymes 7- Alpha-Hydroxylase and 11-Beta-Hydroxylase lead to low renin levels [10, 53].

What is SHBG? + Symptoms of Low Levels & How to Raise