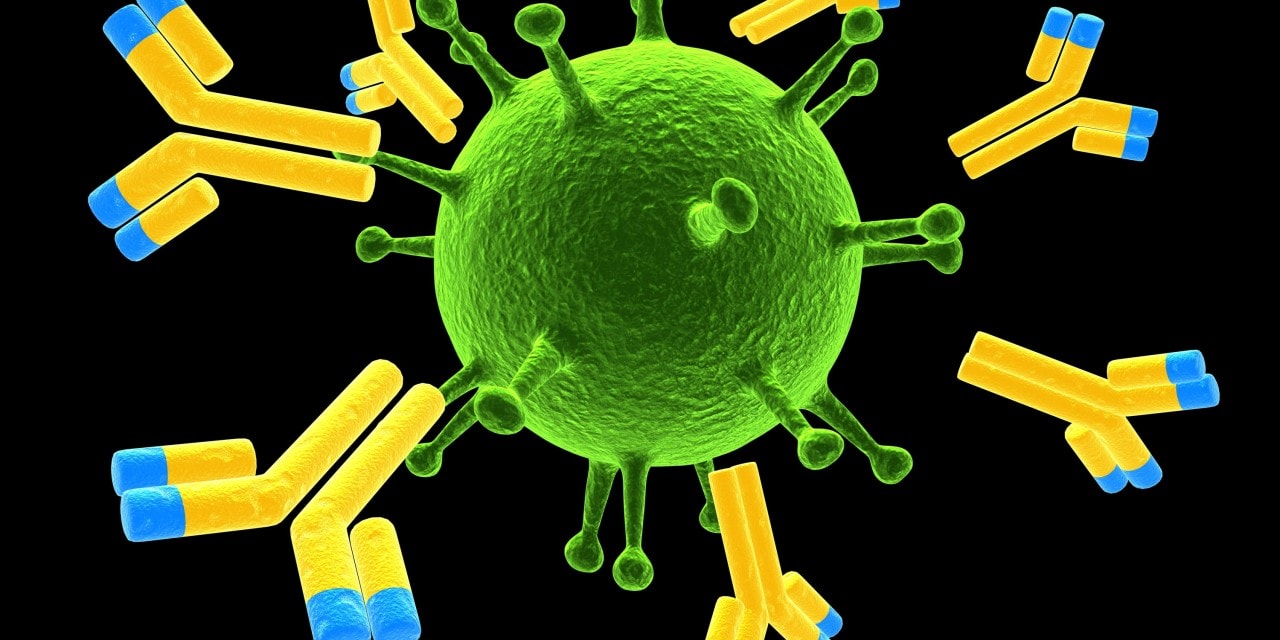 Immunoglobulin A is the first line of defense against harmful microbes, but it also maintains your immune tolerance. It is the dominant antibody in your gut, respiratory mucus, breast milk, and other secreted fluids. Read on to find out what the IgA blood test can tell you about your health and whether your levels are normal.

Immunoglobulin A (IgA) is a type of antibody. Antibodies are proteins of the immune system that bind to and neutralize pathogens such as bacteria and viruses [1].

IgA is one of the five immunoglobulin classes (in addition to IgG, IgM, IgD, and IgE) [1].

In the human body, more IgA is produced per day than all other antibodies combined [2, 3, 1].

IgA is produced by white blood cells (B cells) and is then transported into fluids secreted by mucosal cells. This IgA is called the secretory IgA. Secretory IgA is the dominant antibody in [1, 2]:

IgA is also the second most prevalent antibody in the blood (after IgG) [2, 4].

Circulating IgA is in monomeric form, whereas secretory IgA, in the mucosal secretions of respiratory, intestinal, and genitourinary systems, is dimeric (in the form of two joined IgA monomers) [5].

IgA is an antibody produced by white blood cells to protect the body from infection.

Mucosal barriers (where IgA is present) separate the interior of the body from the outside world. At these sites, IgA maintains a balanced immune response. It defends against harmful microbes but also prevents reactions against good bacteria and environmental proteins (such as food antigens) [2].

IgA has many important functions:

IgA helps neutralize toxins and maintain a balanced immune response. It prevents an attack against the good bacteria in the gut and harmless compounds in food.

Normal IgA levels vary slightly depending on the laboratory used to test them. They gradually increase with age and weight in children until they reach stable levels in adults. Blood IgA levels are higher in males than in females [11].

These are the approximate values for IgA depending on age:

Normal IgA levels depend on age. According to most labs, 60-400 mg/dL is the normal range for adults.

Both low and high IgA levels are associated with higher mortality.

In 4,255 Vietnam-era war veterans, higher IgA levels were associated with a 2-fold increased risk of dying from both all-causes and infectious diseases [12].

On the other hand, higher IgA was associated with a decreased risk of death from cancer, specifically non-lung cancer, as well as from respiratory disease [15].

Severe IgA deficiency was associated with higher mortality in the first 10 – 15 years after diagnosis [16].

High and low IgA levels can have many underlying causes. Thus, the health conditions triggering abnormal IgA levels are more likely to impact a person’s risk of dying than IgA levels themselves. Additional studies should give us more clues about this link.

Both high and low IgA levels have been linked with an increased risk of dying. More research is needed to draw any conclusion, though.

If you’re not a big fan of genetics, skip straight to our other posts about IgA in the next section.

The following genes have been associated with IgA levels and IgA deficiency:

TNFSF8 is a cytokine that induces immune cell (T-cell) production.

This variant has also been associated with IBD [18].

IFIH functions as a sensor for viral infections [19].

This variant has also been associated with type 1 diabetes and lupus [19].

CLEC16A is a protein of unknown function found on white blood cells.

This gene of unknown function has been associated with cancer [20].

This variant could affect either ATG13, AMBRA1, or both genes (still unknown).

Both ATG13 and AMBRA1 are involved in the recycling of cell components (autophagy) [26, 27].

This gene plays an important role in brain development. It has been associated with schizophrenia, autism, depression, and multiple sclerosis [28, 29, 30, 31].

HS1.2 is an enhancer region important for immunoglobulin production [32].

HS1.2 has been associated with psoriasis and rheumatoid arthritis [34, 35].

HLA-DQA1 plays an important role in the immune system. It helps distinguish viruses and bacteria from the body’s own proteins.

This gene has been associated with celiac and Graves’ disease [36, 37].

Immunoglobulin A (IgA) is an antibody made by white blood cells. It’s concentrated in fluids that cover mucous membranes in the body–such as those in the gut, respiratory system, eyes, and mouth. IgA works to protect the body from infections and toxins while building immune tolerance. Normal IgA levels prevent the immune system from mounting an attack against food components and good bacteria in the gut. Your doctor may order a blood test to check if your IgA levels are normal. The normal range depends on age; it is lower and more narrow in babies and children. In adults, values between 60 and 400 mg/dL are considered normal by most labs. Make sure to discuss your results with your physician.