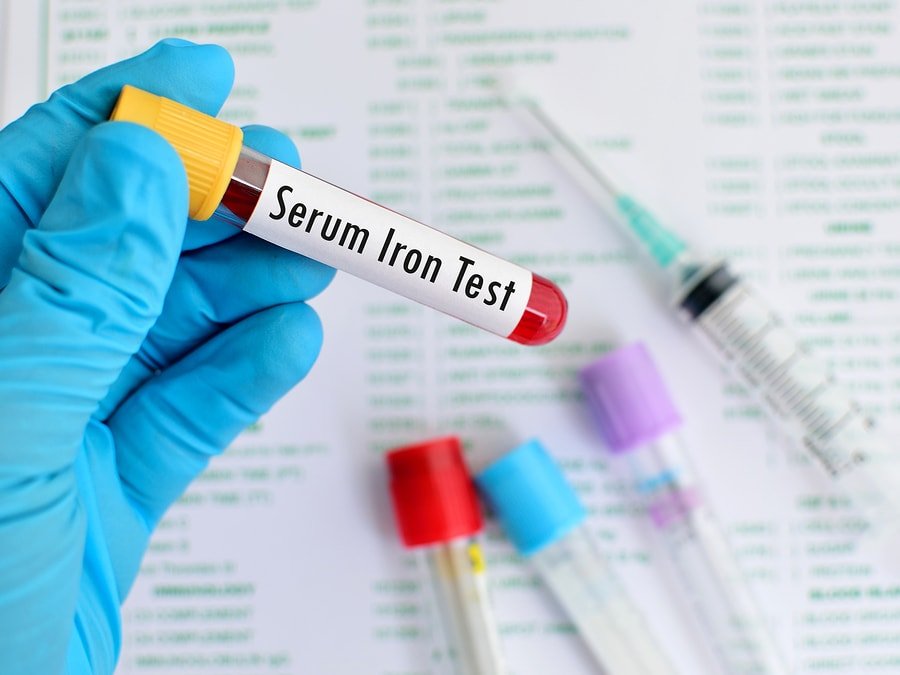 Iron is an essential mineral that plays many important roles in the body. One of its main roles is to transport oxygen via red blood cells throughout the body for energy production. With low iron levels, oxygen saturation is low. Both iron deficiency and overload can cause a host of health problems. Read on if you suspect either.

Iron (Fe) is an essential element critical for the growth and survival of nearly all organisms [1].

Because of these powerful roles, low iron levels can lead to detrimental effects and eventually, death [8].

However, excessive levels of iron can form reactive oxygen species which lead to tissue and DNA damage [9].

Iron is one of the most abundant metals in the human body. Most well-nourished adults have approximately 3 – 5 g [10].

The liver has the largest capacity to store excess iron [15].

To maintain iron homeostasis, hepcidin, a protein hormone secreted by the liver, inhibits dietary iron absorption in the gut and reduces blood iron levels when iron stores are sufficient [16, 17].

Iron Absorption in the Small Intestine

Cells that line the wall of the small intestine (duodenum and jejunum) help regulate iron absorption based on the iron demands [18, 19].

Heme iron (iron bound to hemoglobin and myoglobin found in meat) can be directly absorbed by intestinal cells. This process is independent of acidity and is not affected by inhibitors of iron absorption (i.e., phytate and polyphenols) and thus, is more efficient [20].

Non-heme from plant sources iron is much harder to absorb than heme iron because the intestine can only absorb the ferrous form (Fe2+) and not the ferric form (Fe3+). At physiological (non-acidic) pH, ferrous iron (Fe2+) is readily oxidized to insoluble ferric iron (Fe3+), which cannot be absorbed [21].

Roughly 1 – 2 mg of dietary iron is absorbed daily, however, processes like hemoglobin synthesis require 20 – 25 mg of iron per day. Most of this iron is obtained through the recycling of old red blood cells by resident macrophages (special white blood cells) [24].

Blood iron measures the amount of circulating iron in the blood. Blood iron is a poor measure of iron status in the body because it fluctuates daily depending on the ingestion of iron-containing foods [26, 27].

A blood iron test without a TIBC or transferrin has limited value except in cases of iron poisoning.

Ranges will vary slightly between labs, due to differences in equipment, techniques, and chemicals used.

Ferritin levels can serve as a measure of total body iron stores [28].

Low ferritin levels signal that the body’s iron stores are low. Higher levels, on the other hand, may indicate that you have a condition that causes the body to store too much iron [29].

However, ferritin is also an acute phase protein, which means it plays a role in the immune response, and increases in conditions such as chronic inflammation, infections, and cancer, irrespective of iron levels [29, 27, 30].

According to the World Health Organization, the generally accepted cut-off level for blood ferritin levels in which iron stores are depleted is 15 ng/mL for people aged 5 years and older and 12 ng/mL for people younger than 5 years of age [31].

Total iron-binding capacity (TIBC) measures the total capacity of your blood to bind and transport iron. It is used to estimate the amount of iron stored in your body [32].

TIBC is an indirect measure of transferrin, a protein that binds iron molecules and transports them in the bloodstream [33, 34].

The combined results of transferrin, iron, and TIBC tests are helpful in the differential diagnosis of anemia, iron-deficiency anemia, thalassemia, sideroblastic anemia, and hemochromatosis.

Iron deficiency is the most common nutritional deficiency in the world, affecting 66 – 80% of the world’s population [39, 40].

Iron deficiency is the leading nutritional cause of anemia [39, 40].

Causes listed below are commonly associated with low iron. Work with your doctor or another health care professional to get an accurate diagnosis. A result that’s lower than normal, doesn’t necessarily mean that you have a health condition needing treatment. Your doctor will interpret your value, taking into account your medical history, symptoms, and other test results, such as hemoglobin, ferritin, transferrin saturation, or TIBC.

In addition, people who engage in endurance exercise are more likely to have low iron [56].

It is important to note that a common and often missed cause of iron deficiency anemia is heavy menstruation. This slow blood loss over time can often result in losing too much iron. Also, because it is a slower process, the body can adapt to the symptoms of iron deficiency and they may be better tolerated. It is important for women with heavy menstruation to have iron levels checked.

Long-term anti-inflammatory drug use (ibuprofen, naproxen, diclofenac) can increase bleeding in the gut.

Iron decreases in chronic inflammatory conditions, such as autoimmune disease, chronic infections, chronic kidney disease, or cancer [59, 60, 61, 62, 63]. This is referred to as anemia of chronic disease.

Tissues affected by infections or inflammation release cytokines that reduce iron blood levels, therefore leading to the development of anemia [65].

Anemia of chronic disease is considered to be a mild-to-moderate form of anemia and treatment is primarily centered on the underlying condition [17].

Groups at higher risk of iron deficiency include:

IDA is characterized by a defect in hemoglobin synthesis, resulting in the reduced capacity of the red blood cells to deliver oxygen to tissues [79].

Children and women are at higher risk. Iron deficiency can result in preterm birth, poor growth and cognitive skills, and neurological dysfunction [75].

Iron deficiency represents a spectrum ranging from iron depletion, which causes no biological impairments, to iron-deficiency anemia, which affects the functioning of several organ systems [82].

Iron deficiency can be divided into 3 stages, including [83]:

Iron stores are lowered or absent, serum iron concentration, hemoglobin, and hematocrit are normal. This stage of iron deficiency is manifested with the reduction or absence of bone marrow iron stores and reduced serum ferritin levels.

Serum iron (SI) and transferrin saturation are reduced in addition to reduced iron stores. Hemoglobin and hematocrit are still within normal limits.

During this phase, in addition to the depletion of iron stores, serum iron, and transferrin saturation, hemoglobin and hematocrit levels are reduced.

The red blood cells of individuals that have iron-deficiency anemia are smaller and paler than normal [84].

Iron-refractory iron deficiency anemia is caused by a rare mutation in a gene (encoding Matriptase-2, an iron regulatory enzyme) expressed in the liver, which leads to high hepcidin levels. As a result, iron absorption from the intestine and release from macrophages is inhibited, resulting in severe iron deficiency [85, 86].

Genetic Variants that are Associated with Anemia (SelfDecode)

Causes listed below are commonly associated with high iron. Work with your doctor or another health care professional to get an accurate diagnosis. A result that’s higher than normal, doesn’t necessarily mean that you have a health condition needing treatment. Your doctor will interpret your value, taking into account your medical history, symptoms, and other test results, such as hemoglobin, ferritin, transferrin saturation, or TIBC.

Chronic iron overload can be caused by:

The body’s rate of iron absorption depends on the action of hepcidin, a circulating hormone secreted by the liver that decreases iron absorption. Most hereditary iron disorders like hemochromatosis result from mutations in genes affecting hepcidin production [103, 104].