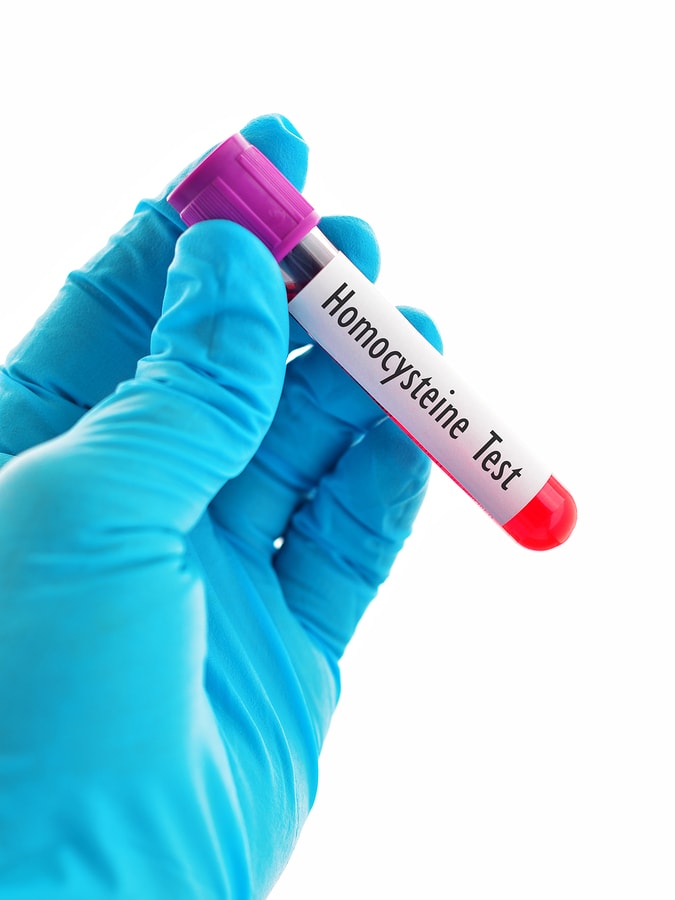 High homocysteine can be a marker of vitamin deficiency. It has been linked to many health problems including heart disease, dementia, and Alzheimer’s. However, studies have shown that lowering homocysteine with vitamin supplements doesn’t necessarily produce desired health benefits and may even be harmful. This post explains homocysteine, reviews the factors that influence its levels, including diet, lifestyle, and genetics (i.e. MTHFR mutation), and discusses the best ways to optimize your levels in ways that are actually conducive to better health.

Homocysteine is a sulfur-containing amino acid that the body produces from another amino acid, called methionine. Foods that are high in methionine include meat, egg whites, and seafood.

Homocysteine is usually found in very small amounts in your body. That’s because your body converts it efficiently into other products with the aid of B vitamins. Higher homocysteine levels can indicate a deficiency of these vitamins [1].

The Breakdown of Homocysteine

When homocysteine can not be converted to other compounds, it builds up in the body and may cause damage. B vitamins play a very important role in this balance.

A doctor may order a homocysteine test to:

Homocysteine is not a commonly used test. It’s relatively expensive and rarely covered by insurance. Ranges and results may slightly vary from lab to lab, due to differences in equipment, techniques, and chemicals used.

A high-protein meal can significantly increase homocysteine levels. Therefore, fasting throughout the night before a blood test is recommended to ensure the most accurate results [5].

The normal range of homocysteine is usually below 15 micromoles per liter (µmol/L).

Elevation in homocysteine can be [2]:

A result that is higher than normal doesn’t necessarily mean that you have a medical condition needing treatment. Your doctor will interpret a high homocysteine result together with your medical history, signs and symptoms, and other test results.

Causes listed below are commonly associated with elevated homocysteine. Work with your doctor or another health care professional to get an accurate diagnosis.

Homocysteine levels increase if there is:

Several studies that looked at people with different dietary patterns, found that people who were on a vegetarian or a vegan diet had significantly higher homocysteine levels, likely due to lower vitamin B12 levels [8, 9, 10, 11].

Studies suggest that both smoking and exposure to second-hand smoke can increase homocysteine levels [12, 13].

Kidneys help transform homocysteine into other amino acids [26]. Therefore, a decrease in kidney function can cause an accumulation of homocysteine.

This explains why those with kidney disease have high homocysteine levels [27, 28, 29].

Other than homocystinuria, slight elevations in homocysteine can be caused by relatively common mutations in the MTHFR gene [38, 39, 40].

Every individual has 2 MTHFR alleles (1 from each parent). Mutation in just one MTHFR alleles is referred to as “heterozygous”; mutations of both is called “homozygous”. Approximately 10% of people of European descent have two mutations in this gene (homozygous form).

The two most common MTHFR mutations (polymorphisms) found in humans are:

In a study of 872 healthy people, those who were homozygous for the MTHFR mutation (MTHFR 677TT genotype) were 10 times more likely to have high homocysteine levels compared to those with normal MTHFR [40].

Elevated homocysteine levels have been linked to a number of diseases.

However, if you have high homocysteine levels it doesn’t mean you have any of the below-listed diseases!

High homocysteine (hyperhomocysteinemia) has been suggested as a potential risk factor for heart diseases since the early 90s [56, 57].

Studies have shown that higher fasting blood homocysteine levels are linked to a higher risk of heart disease and stroke [56, 58, 59].

However, the exact role homocysteine plays in heart disease has not yet been confirmed. Some scientists suggest that higher levels of homocysteine contribute to the narrowing and hardening of the arteries (atherosclerosis) [6, 60, 61, 59].

On the other hand, a large study of over 115k people suggests that lifelong moderate homocysteine elevation (based on genetics) had little or no effect on heart disease and calls previously published studies into question [62].

In addition, there is some controversy when it comes to lowering homocysteine levels using supplements. Large-scale studies have shown that using combined vitamin B supplements to lower homocysteine was ineffective in preventing heart disease, and even harmful in some cases [63, 64, 65]!

A meta-analysis of 15 studies with over 71k people has found that homocysteine-lowering interventions in the form of supplements of vitamins B6, B9 or B12 given alone or in combination had no effect on preventing heart attack or all-cause mortality compared to placebo, although there was a very small benefit when it came to preventing stroke [66].

Therefore, homocysteine may not actually be a risk factor but a risk marker for heart disease, harmful when elevated due to other factors that increase heart disease risk, such as a diet rich in red meat and low in fruits and vegetables or smoking [67].

Because of the discrepancies listed above, the American Heart Association doesn’t consider homocysteine a major factor for heart disease. That’s also why routine testing is not recommended [68, 67].

Technical: Homocysteine may cause an inflammatory response in vascular smooth muscle cells by stimulating CRP production. However, this is based on animal research and has yet to be confirmed in humans [69]. CRP or C-reactive protein is a well-known marker of chronic inflammation that can increase the hardening of the arteries and heart disease risk.

A study has found that people with insulin resistance tend to have higher homocysteine, likely due to the effects of insulin exerts on homocysteine metabolism and kidney clearance [70].

A study with 924 men found that those in the upper third of homocysteine levels were more than twice as likely to be depressed than those in the lowest third [71].

A second study found that individuals with the highest homocysteine levels (>12 µmol/L) tended to have lower levels of SAMe, a nutrient that is vital for the production of neurotransmitters associated with mood-enhancement [72].

In a study in 236 hospitalized acutely ill older patients, supplementation with vitamins B2, B6, B12, and folic acid decreased homocysteine levels and reduced depressive symptoms [73].

A systematic review and meta-analysis of 111 articles found an association between cognitive decline and increased plasma homocysteine levels. However, treatment with vitamin supplements failed to prevent cognitive decline [74].

Cell and animal models suggest that homocysteine may be able to trigger neuronal damage through oxidative stress, DNA damage and activation of pro-apoptotic (pro-cell death) factors in cell and animal models [77]. However, these findings don’t necessarily apply to humans.

Homocysteine levels can be higher in some autoimmune diseases such as

Homocysteine levels are only elevated in some cases of multiple sclerosis, but not others [82].

Higher homocysteine has been associated with a higher risk of osteoporosis [6, 83].

However, treating high homocysteine with vitamin B supplements is unlikely to help. A study in over 75k women found that vitamin B6 and B12 supplements, alone or combined, increased the risk of hip fractures by up to 50% [84].

While we still don’t completely understand the causes of migraines, some clinicians speculate that homocysteine may cause migraines by inflaming the blood vessels and contributing to the blood clotting cascade (thrombosis).

The concentration of homocysteine in cerebrospinal fluid that bathes the brain is increased in migraine patients [85].

People who have mutations in genes that are involved in homocysteine metabolism, such as MTHFR mutation rs1801133, are more likely to get a migraine [86].

B vitamin supplementation decreased the severity and frequency of migraine attacks in some studies [85, 87, 88].

However, the association between migraine and homocysteine levels is speculative and further research is needed to confirm it.

Although much rarer, and generally less of an issue than high levels, low homocysteine levels may also cause problems.

Low homocysteine has been associated with nerve damage of unknown cause (idiopathic peripheral neuropathy) [90].

How to Decrease Homocysteine Levels

The most important thing is to work with your doctor to find out what’s causing your high homocysteine levels and to treat any underlying conditions.

Discuss the lifestyle changes listed below with your doctor. None of these strategies should ever be done in place of what your doctor recommends or prescribes!

The best way to prevent homocysteine from increasing is to ensure your diet contains adequate amounts of folate (vitamin B9), vitamin B12, and vitamin B6.

Folate is abundant in fresh fruits and vegetables, while vitamin B12 is found in animal products, including meat, fish, cheese, and milk. The richest sources of vitamin B6 include fish, beef liver, potatoes and other starchy vegetables, and fruit (other than citrus).

Studies suggest that simply supplementing with these vitamins to lower homocysteine levels doesn’t prevent diseases and disorders associated with high homocysteine, such as heart disease, impaired cognitive function, dementia, and osteoporosis. In fact, taking combined vitamin B supplements may even be harmful [84, 65].

In other words, homocysteine is likely a marker of a healthy diet and lifestyle, and not a target to address in its own right. So it’s important to check your vitamin levels and correct any deficiencies, but ultimately, it’s best to prevent deficiencies by having a healthy balanced diet.

However, in some cases, vitamin deficiencies can have non-dietary causes, such as bleeding or gut issues (malabsorption), in which case they can’t be corrected by simple dietary adjustments. Work with your doctor to address such underlying issues.

And if you do need to take supplements, it’s best if you can take active forms of vitamins, such as methylcobalamin, or 5-MTHF.

Although exercise increases homocysteine short-term, in the long term, it is associated with lower homocysteine levels.

A systematic review of 34 studies found that regular exercise may be able to decrease homocysteine levels [91].

A study in Parkinson’s disease patients found that those who regularly engage in exercise had lower homocysteine levels [92].

Although the link between stress and homocysteine is not quite clear, several studies have found that stress can increase homocysteine levels [16, 17, 18].

Therefore, finding ways to avoid or cope with stress can be beneficial to decrease homocysteine but also to improve health in general.

A study has shown that yoga may help reduce elevated homocysteine levels [93].

Both smoking and exposure to second-hand smoke can increase homocysteine levels [12, 13].

Discuss your alcohol consumption with your doctor. Avoid heavy drinking.

The following supplements have been found to decrease homocysteine in small-scale clinical trials:

However, as lowering homocysteine with vitamins has shown little clinical benefit, using other supplements for the same purpose will likely also be clinically ineffective.