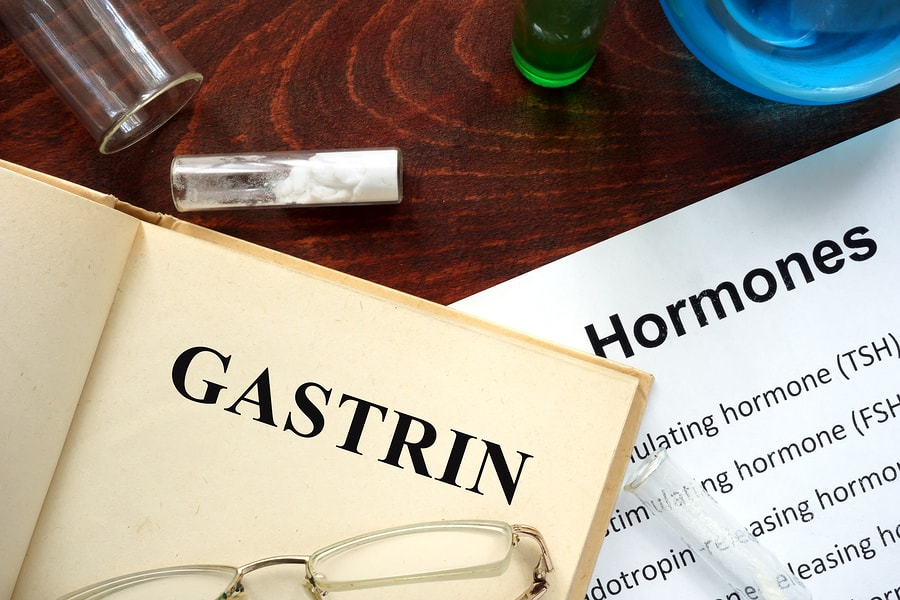 Have you ever wondered how your body is able to break down the foods you eat after they enter your stomach? Balanced levels of a group of hormones and enzymes work together to make this possible, one of them being gastrin. Read on to learn more about the roles gastrin plays in gut health and what can affect its levels.

Gastrin is a hormone produced and secreted inside the body that is mainly responsible for promoting digestion. Gastrin targets the stomach, small intestine, and pancreas to aid digestion. But gastrin also helps protect and replenish the cells in the stomach lining [1, 2].

Gastrin mainly acts by boosting stomach acid production, which helps to digest food. Gastrin is released in the largest amounts by cells in the stomach near the entrance to the small intestine (called antral G-cells). The small intestine and the pancreas have similar cells that also make and release gastrin [3].

Gastrin is found in many different forms but the most common in the body are gastrin 17 and gastrin 34, also known as little gastrin and big gastrin respectively [1].

How Is Gastrin Made?

Gastrin is a peptide hormone, made up of multiple amino acids. Gastrin 17 has 17 amino acids while gastrin 34 is bigger and has 34. Both are made by activating progastrin, found in the inner layer of the stomach. Progastrin is broken down at different points to produce the active forms of gastrin, which are then released [1, 3].

Why Is Gastrin Released?

Gastrin is released in the presence of food and proteins in the stomach, vagus nerve stimulation or excess blood calcium [4].

When we eat something, the food enters the stomach, causing the release of gastrin (gastrin 17). Gastrin increases stomach acid, which works to kill any bacteria and to break down the food. This helps with digestion before the food passes through the small intestine for further breakdown [5, 6].

Stomach acid also re-balances the acid level of the stomach, which is normally very high (pH of ~2). When food enters the stomach, it makes the environment less acidic, triggering gastrin release to bring the acidity back down [5].

Gastrin is also released from the small intestine (as gastrin 37), helping to further break down food [5, 6].

The vagus nerve is the tenth cranial nerve, critical for the heart, lungs and digestive system. This nerve is sometimes stimulated by the thyrotropin-releasing hormone, TRH. The vagus nerve promotes gastrin release in two ways [4, 7]:

Somatostatin is a hormone that blocks the activity of other hormones. Released in the stomach, it blocks the activity of gastrin and stomach acid-producing cells. It’s released once the food is digested and starts to move to the intestines, as well as when the stomach pH becomes too acidic. But when the vagus nerve releases acetylcholine, it reduces somatostatin [4].

Gastrin-releasing peptide (GRP) is secreted from the vagus nerve, which causes gastrin release [4].

Calcium can act as a messenger to affect many different pathways in the body. Some of these pathways can lead to vagus nerve stimulation or acetylcholine release and a subsequent increase in gastrin and gastric acid [8, 9].

In a clinical trial on 17 volunteers with normal levels of gastric acid, a calcium-like compound (cinacalcet) was used to test the effect on stomach acid. All participants were placed on a specific diet for 18 days, and on the 8th day, half were given cinacalcet for 10 days. Cinacalcet increased gastrin and stomach acid levels by mimicking calcium (via receptors) [10].

Secretin is a hormone released from the upper part of the small intestine. It is triggered by a rise in stomach acid after a meal. Secretin blocks the further increase in stomach acid and prompts the pancreas to neutralize it (by releasing bicarbonate). This helps to prevent damage to the gut. Secretin also increases bile production and release in the liver, which aids digestion [11, 12].

Gastrin as a Growth Factor

Gastrin and the compounds it is made from increase the growth of cells in the stomach lining. Gastrin regenerates this tissue, keeping it thick and intact [2].

Gastrin in the bloodstream and gut is a mixture of compounds (peptides and fragments).

While gastrin 34 lasts longer in blood, gastrin 17 is 5 times stronger than gastrin 34 at stimulating stomach acid. For this reason, gastrin 17 is the form predominantly released in the body during digestion. When levels of gastrin 17 are abnormal, this can be indicative of a problem – therefore, it is useful to identify if there is more “big” or “little” gastrin in the bloodstream. This can be done using a blood test (immunoassay) [1, 13, 14].

To prepare for the test, patients are required to fast, usually overnight (or 12 hours) to ensure no food is being actively digested. Gastrin levels are measured in pg/mL (picograms per milliliter). Since gastrin is measured in very small amounts (a picogram is one trillionth of a gram!), the test needs to be precise [13, 14].

Some lab-to-lab variability occurs due to differences in equipment, techniques, and chemicals used. Don’t panic if your result is slightly out of range in the app – as long as it’s in the normal range based on the laboratory that did the testing, your value is normal.

Normal gastrin levels are considered to be less than 100 pg/ml. However, in some studies gastrin from 25 to 55 pg/mL is taken as the “normal” or “control” value. This is because participants are usually asked to fast in preparation for the study in order to obtain a baseline gastrin level. Gastrin levels during digestion likely reach up to 100 pg/ml [14, 15, 16].

Gastrin at normal levels is beneficial for killing bacteria in the food we eat, preventing infections and bacterial growth further down the digestive tract. Levels of gastrin higher or lower than normal can be a sign of disease [5].

Hypergastrinemia is a term used to describe increased blood gastrin levels: above 100 pg/ml. Gastritis refers to stomach inflammation, which can be due to diet, infection or increased gastric acid production [15, 17].

The conditions we discuss here are commonly associated with high gastrin levels, but this single symptom is not enough for a diagnosis. Work with your doctor to discover what underlying condition might be causing you hypergastrinemia and to develop an appropriate plan to improve your health.

Excess gastrin may increase the risk of colon cancer. Gastrin causes the growth of colon cancer and cancer cells, in turn, produce their own small supply of gastrin – this results in an overall increase in blood gastrin [19].

A gastrinoma is a pancreas tumor that causes large amounts of gastrin and gastric acid to be released. It can lead to Zollinger-Ellison syndrome, a disease with very high gastrin levels, stomach and small intestine ulcers, and diarrhea. People with this disease can have gastrin levels as high as 2000 pg/ml [14, 17].

The following conditions are commonly associated with low gastrin levels, but this single symptom is not enough for a diagnosis. Work with your doctor to discover what underlying condition might be causing your unusually low gastrin levels and to develop an appropriate plan to improve your health.

Irritable bowel syndrome (IBS) is a condition with symptoms like diarrhea, abdominal pain, or constipation, usually associated with eating. In an observational study, gastrin levels were lower in people whose main symptoms of IBS were constipation and abdominal pain [22].

Certain genes on SelfDecode are associated with reduced acid secretion from gastrin.

Prescription drugs that target stomach acid also tend to affect gastrin levels. Remember that you should take these drugs as prescribed by your doctor and report any adverse effects observed during the treatment.

Since these drugs block stomach acid production while active, the body compensates by making more gastrin once the drug is eliminated. This may lead to very high gastrin levels and potentially other diseases [24].

Most studies that compare gastrin levels between diseased and normal individuals use a specific test (immunoassay) to determine baseline levels. But this method of gastrin testing can be inaccurate, potentially giving false low readings. It’s also unable to detect all the different forms of gastrin. For this reason, more than one round of testing should be done, one for each individual, to ensure accurate gastrin level readings until more accurate ways of testing are developed [25].