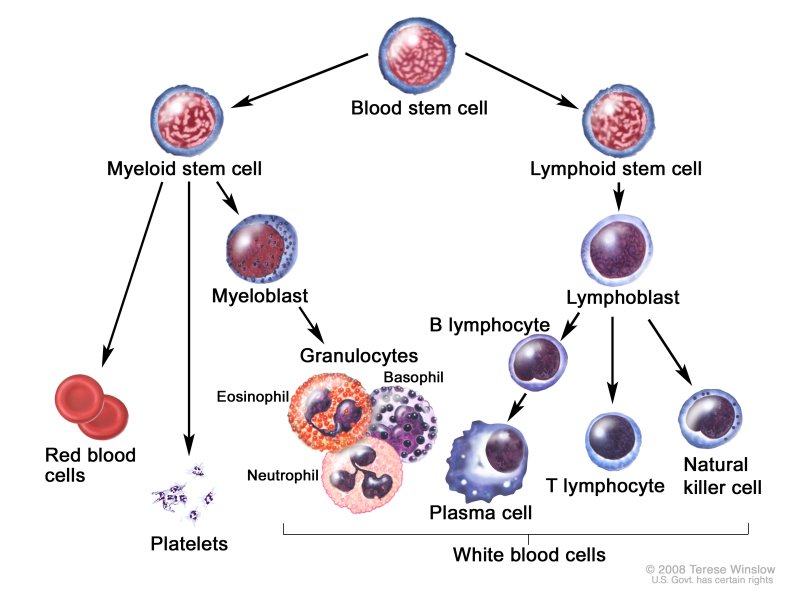 Lymphocytes are a type of white blood cells.

The different types of lymphocytes mostly differ on their site of maturation and functions [1].

There are three different types of lymphocytes: natural killer cells, B cells, and T cells.

Lymphocytes can produce cytokines, which are small proteins that are important for immune system responses, inflammation, and infections [2].

One gene, LSP1 (lymphocyte-specific gene 1), is expressed in lymphocytes (and other cells as well). LSP1 transduces signals between white blood cells [4].

T cells come from the bone marrow and mature in the thymus (and sometimes the tonsils). Different types of T cells include killer, helper, regulatory, memory, and natural killer T cells.

Killer T cells, also called CD8+ T cells, can scan cell surfaces to see if they are cancerous or infected by viruses and bacteria. They destroy infected cells and help prevent autoimmune diseases.

Inappropriate killer T cell activities can lead to the persistence of the pathogens or autoimmune disease [7].

Helper T cells, on the other hand, help start and control the body’s immune response. They help with the activation of killer T cells, maturation of B cells, and secrete cytokines. They can only work when they are activated on the surface of antigen-presenting cells [8].

Helper T cells can be categorized into different groups based on their target pathogens, e.g. Th1, Th2, and Th17.

Read this post to learn more about Th1 and Th2.

There are 3 types of memory B cells, including resident, central, and effector. Memory T cells are especially important for the development of vaccines [11].

B cells mostly function in the adaptive immune system. They secrete antibodies and cytokines and mature in the bone marrow. They work with antigens, molecules that induce an immune response, to produce antibodies [14].

Memory B cells circulate through the body to initiate a fast antibody response when they detect an antigen. They help the immune system respond faster after re-infection [14].

Regulatory B cells help stop lymphocytes that can cause inflammation. They also promote the generation of regulatory T cells [15].

T cells help activate B cells, although there are some B cells that don’t need T cells for activation [14].

Abnormal B cell recognition and transformations of B cells can cause autoimmune diseases like arthritis, diabetes, lupus, multiple sclerosis, and cancers [16].

Natural killer cells work as part of the innate immune system. They provide fast responses to infected cells. ­They do not need antibodies to initiate an immune reaction [17].

Natural killer cells also play a role in the adaptive immune response to help with secondary infections. They are especially needed to help fight cancer and might show innate resistance to viruses like HIV [17].

The simplest test for lymphocytes is the white blood cell count and differential. It only needs a drop of blood to be tested by either manual count in microscopic chambers or by automated counters. Bone marrow can be used for better investigation, but blood samples are more common [18].

Remember that some lab-to-lab variability occurs due to differences in equipment, techniques, and chemicals used. Don’t panic if your result is slightly out of range in the app – as long as it’s in the normal range based on the laboratory that did the testing, your value is normal.

But remember that a single test isn’t enough to make a diagnosis. Your doctor will interpret this test, taking into account your medical history and other tests. A result that is slightly low/high may not be of medical significance, as this test often varies from day to day and from person to person.

Lymphocyte levels can vary according to race, gender, location, and lifestyle factors.

In North America, the reference ranges used during blood tests are:

Other Roles of Lymphocytes

1) May Protect Against Cancer

Higher levels of Lymphocytes/T cells is indicative of the overall survival of cancer patients [20].

Lymphocytes in the gut play an important role in maintaining gut homeostasis. They are also critical for the early response to intestinal infections [22].

The conditions we discuss here are commonly associated with abnormal lymphocyte levels, but this single symptom is not enough for a diagnosis. Work with your doctor to discover what underlying condition might be causing your unusually high or low lymphocyte count and to develop an appropriate plan to improve your health.

Lymphomagenesis is the development of lymphoma or cancer of the lymph nodes.

Lymphoma might result from uncontrolled lymphocyte growth in the body. Mutations in pathways that are involved in tumor suppression can cause the uncontrolled growth of B and T lymphocytes [25].

Hyperactivity of B-cells associated with autoimmune diseases and impaired T-cell function can also lead to lymphoma [26].

The most defining feature of HIV and AIDs is the decrease in number and function of T lymphocytes in the body. Most HIV-infected cells in the body are also resistant to natural killer cells [27].

In studies performed on HIV-infected patients, CD4+ T-cell was depleted the most in the gut [27].

A Th1/Th2 imbalance results in the expression of asthma and allergies. This is mostly caused by Th2 cytokines, which help maintain the inflammation response in allergic diseases [31].

Dermatitis is a chronic inflammatory skin disease. Th2 cells and cytokines play an important part in the inflammatory response and can contribute to dermatitis [32].

Lymphocytosis does not necessarily mean that there is a problem with the immune system and may be temporary. There are rarely any symptoms that go along with lymphocytosis.

Like lymphocytosis, lymphocytopenia does not necessarily indicate an immune system disorder. It could happen after a cold or another common infection. Severe stress, intense physical exercise, or malnutrition can also be the cause [36].

How to Modify Lymphocyte Levels

How to Increase Lymphocytes

Usually, you will only know your lymphocyte levels if the doctor has requested a specific blood test. The most important thing is to work with your doctor to diagnose and treat the underlying health problems that may be causing your abnormal lymphocyte count.

Depending on the condition, your doctor may prescribe the following therapies:

If a drug is causing your low lymphocyte levels (e.g., immunosuppressants and steroids), your doctor may reduce its dose or discontinue it.

People with low lymphocyte levels should boost their immune system by eating a nutrient-rich diet providing sufficient proteins, vitamins, and minerals. Doctors may prescribe a special diet for people with a weakened immune system.

The additional supplements listed below may help you modify your lymphocyte levels. Discuss with your doctor if they may be helpful in your case. None of them should ever be implemented in place of what your doctor recommends or prescribes!

How to Decrease Lymphocytes

The most important thing in case of high lymphocyte levels (lymphocytosis) is to identify and treat the underlying cause (most commonly infections and leukemia). Lymphocytosis usually goes away after resolving the condition that caused it [41].

Because high lymphocyte levels are often caused by infections, the main preventive strategy is to reduce their risk by [42]:

The complementary strategies listed below may help you lower your lymphocyte levels. Discuss with your doctor if they may be helpful in your case. None of them should ever be implemented in place of what your doctor recommends or prescribes!

The following drugs may lower your lymphocyte count if you are already taking them for some other health condition, but never start taking them or increase your dose for this purpose. Always follow the treatment plan prescribed by your doctor.