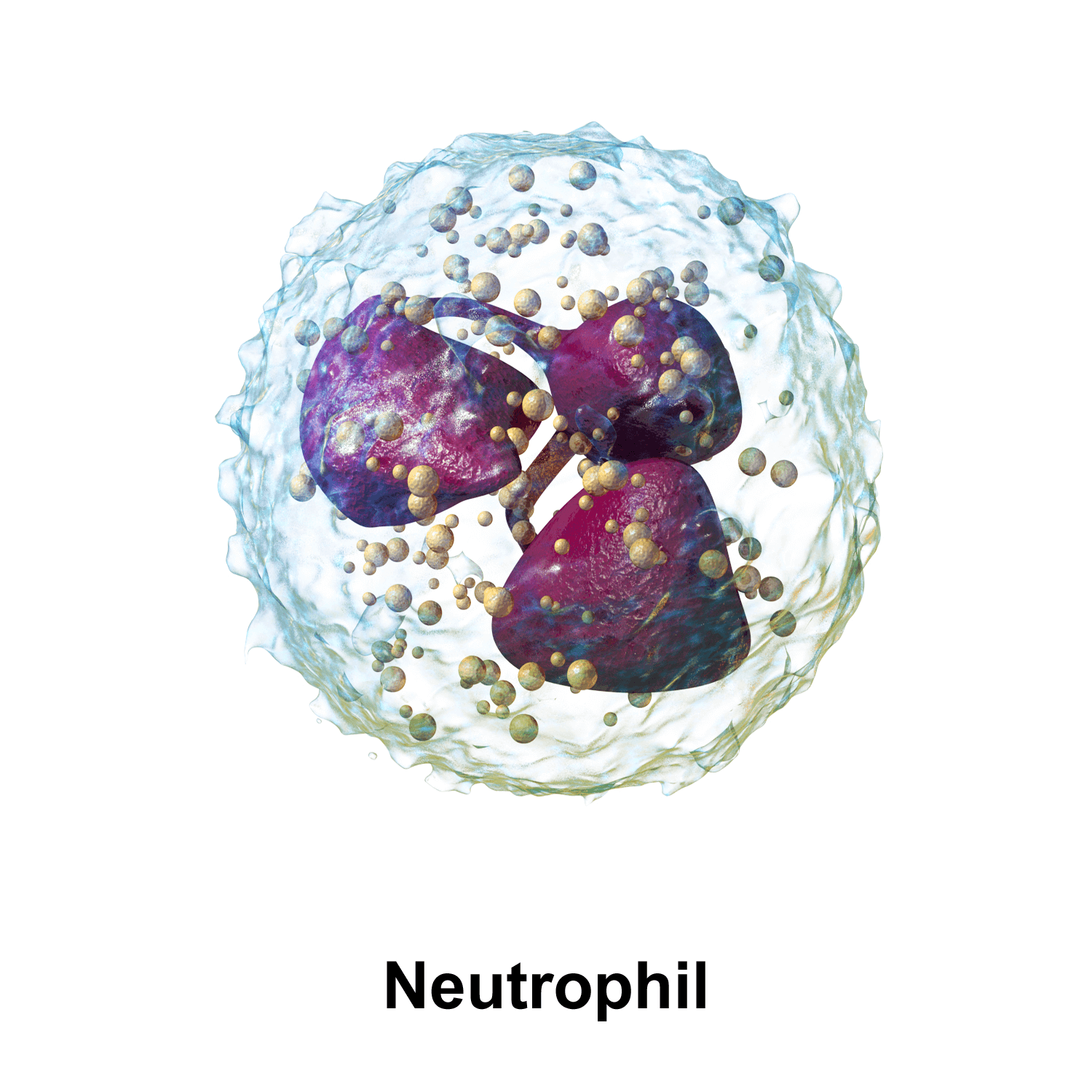 Neutrophils are white blood cells that are vital to the immune system. They help fight against infections and prevent inflammation. Keep reading to learn more about these cells.

They are the most abundant white blood cells in the body. They contain granules, which are important for antimicrobial effects [1].

Like other blood cells, neutrophils are produced in the bone marrow [2, 3].

However, they have a very short lifespan. They survive for less than 24 hours in the blood and will undergo self-destruction automatically [2].

Neutrophils are first-responders at sites of infection and inflammation [1, 4].

The primary function of neutrophils is to prevent infection by attacking pathogens that try to invade the body [5].

Their quick response makes them the first group of immune cells to participate in the body’s immune response. They produce antimicrobial substances and proteases (enzymes) that help degrade and kill microbes [5].

After they finish defending the body against pathogens, some neutrophils activate macrophages (large white blood cells) to help with their removal. The limited lifespan of a neutrophil helps prevent further tissue injury and excess inflammation [7].

A normal neutrophil range is around 1.5 – 8 ×109/l, or 1500 – 8000 cells/microliter. The range may vary slightly between labs, due to differences in equipment, techniques, and chemicals used.

Neutrophils can be normally slightly higher in pregnancy [8].

A single test showing low neutrophils is not enough to make a diagnosis. Your doctor will interpret this test, taking into account your medical history and other test results, and will repeat it if necessary. A result that is slightly low may not be of medical significance, as this test often varies from day to day and between people.

Abnormally low levels of neutrophils in the blood (lower than 1.5 ×109/l) that persist for longer than 6 months are called neutropenia [9, 10].

Causes listed below are commonly associated with low neutrophils. Work with your doctor or another health care professional to get an accurate diagnosis.

Bacterial and viral infections, such as measles, EBV, adenovirus, hepatitis, sepsis, and HIV are common causes of low neutrophil counts [11, 12, 13, 14, 15].

Bone marrow damage and disorders can decrease the production of blood cells, including neutrophils [25, 26, 27, 28].

An enlarged spleen can increase the destruction of blood cells, including neutrophils [28].

Various cancers have been associated with lower neutrophils, especially when they metastasize to the bone marrow [29].

Some rare genetic disorders can cause low neutrophils, such as chronic benign neutropenia and cyclical neutropenia [28, 36, 37, 38].

The most important thing is to work with your doctor to find out what’s causing your low neutrophils and to treat any underlying conditions!

Discuss the additional lifestyle changes listed below with your doctor. None of these strategies should ever be done in place of what your doctor recommends or prescribes!

Keep your immune system running with a healthy lifestyle. Exercise, eat a healthy diet, and refrain from smoking and alcohol consumption. It’s important to have a balanced diet that contains enough nutrients, such as vitamins B12 and folate, that are required to make white blood cells, including neutrophils [21, 22].

When your neutrophils are low, you may be more vulnerable to infection. Proper hygiene can reduce your risk of infections [40].

A result that is slightly higher may not be of medical significance, as this test often varies from day to day and between people. Your doctor will interpret this test, taking into account your medical history and other test results, and will repeat it if necessary.

Abnormally high levels of neutrophils in the blood are called neutrophilia [9].

Causes listed below are commonly associated with low neutrophils. Work with your doctor or another health care professional to get an accurate diagnosis.

Patients with an inflamed appendix (appendicitis) have a significantly higher than normal neutrophil counts. However, the neutrophil count does not indicate the severity of the illness and is not sensitive enough to be a disease marker [43].

Strenuous exercise can increase neutrophils in the short-time [46].

A study found that not getting enough sleep increases neutrophils [47].

Tissue damage due to injury or surgery increases neutrophils [48, 49].

A study that measured neutrophils in 41 people with depression found that their neutrophils were higher when compared to healthy people [50].

Bone marrow disorders, such as leukemia can increase neutrophil production [55, 56].

A mutation in the CSF3R gene promotes neutrophil formation. This can lead to higher susceptibility for hereditary chronic neutrophilia [9].

Too much neutrophil activity can increase the release of agents that are toxic to cells (cytotoxic) and over-activate parts of the immune system. Under normal circumstances, this helps protect your body from infections or injury. However, prolonged and unregulated release of these compounds can damage your body’s tissues [57, 58].

After a heart attack, neutrophils clear the dead cells and debris around the injured area. After neutrophils die, macrophages release growth factors, causing inflammation and tissue formation, which makes scars in the heart (cardiac fibrosis) [60].

A high neutrophil to lymphocyte ratio (NLR) is a predictor of heart disease. It is associated with an increased risk of irregular heartbeat (arrhythmia) and death in patients undergoing a procedure to treat heart disease (percutaneous coronary intervention) [61, 62].

A study in 4625 people found that higher neutrophils counts were associated with a higher risk of heart disease [63].

Similar results were also found in yet another study of 4860 men [65].

In general, neutrophils may play a role in the start of cancer, tumor formation, and the spreading of tumors to other places in the body (metastasis) [66].

The neutrophil to lymphocyte ratio (NLR) is a blood marker scientists have used to try and predict the outcomes of various cancers (gut, lung, head, neck, ovarian, etc.). Multiple studies have shown that increased NLR is associated with poor prognosis in colon, pancreatic, stomach, and lung cancer [67, 68, 69, 70].

In a review of over 100 studies and 40,000 patients, an NLR above 4 was associated with worse overall cancer survival rates [71].

The most important thing is to work with your doctor to find out what’s causing your high neutrophils and to treat any underlying conditions!

Discuss the lifestyle changes listed below with your doctor. None of these strategies should ever be done in place of what your doctor recommends or prescribes!

Make sure you get adequate sleep (7-8 hours per night). Restricted sleep has been associated with elevated neutrophil levels [47].

People of African descent have lower neutrophil levels than those of European descent. This reduced count may be due to a variation in the Duffy Antigen Receptor for Chemokines (DARC) gene, called the “Duffy null polymorphism,” rs2814778 [72].

VPS45 is a gene that encodes a protein that helps control membrane trafficking. In a study of 7 children with mutations in the gene, the children had low neutrophil levels (neutropenia) and neutrophil dysfunction [73].

Mutations in the CXCR4 gene are associated with WHIM syndrome, a rare disease where the body’s immune system does not function properly. WHIM patients have severe low neutrophil levels (neutropenia) because neutrophils do not exit the bone marrow [74].

People with Kostmann’s disease have neutrophil levels lower than 0.2 ×109/l. Some of the patients have mutations in ELA2 or HAX-1. Additionally, Kostmann’s patients can also acquire CSF3R gene mutations [9].

Chediak-Higashi patients have CHS1 gene mutations, which can cause neutropenia [9].

Shwachman-Diamond is a rare disorder, where the patients have defective neutrophil movement in the blood. The SBDS gene has a mutation that is associated with neutropenia [9].

A mutation in the CSF3R gene promotes neutrophil formation. This can lead to higher susceptibility for hereditary chronic neutrophilia [9].

PSTPIP1 mutation can play a role in neutrophilic dermatoses susceptibility [75].

Studies suggest that people with the GPSM3 SNP rs204989 may have decreased GPSM3 production and be protected against rheumatoid arthritis. This specific variation reduces neutrophil movement to the inflammation site, which prevents long-term inflammation that is associated with arthritis [76].

A mutation in the RAC2 gene is associated with neutrophil dysfunction and can cause a person to be predisposed to bacterial infections. It is also associated with human immunodeficiency syndrome [77].