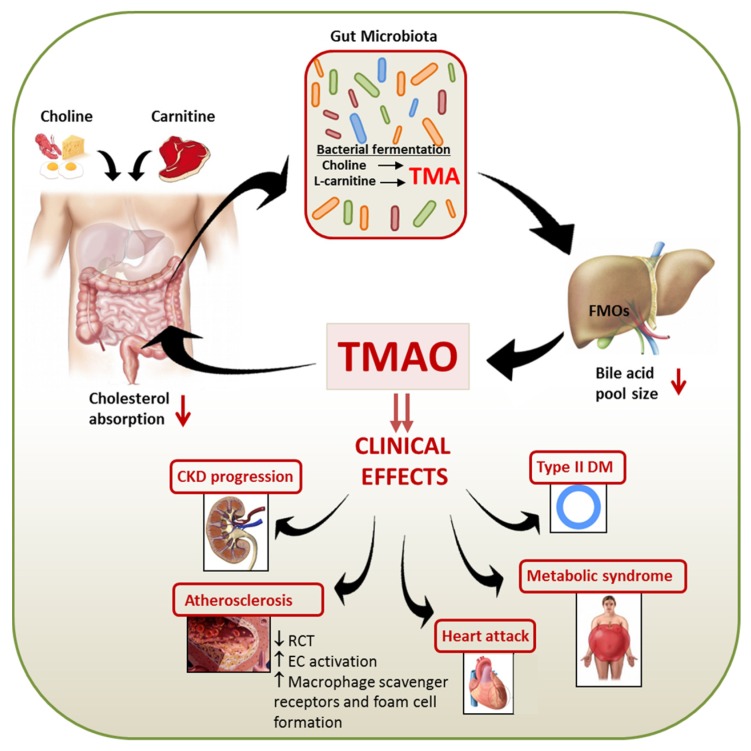 TMAO (trimethylamine N-oxide) is produced by gut bacteria from choline, lecithin, and L-carnitine-rich foods (mainly fish, meat, egg, and dairy). High levels are associated with heart disease, hardening of the arteries, diabetes, and colon cancer. However, the role of TMAO in these diseases is still controversial. Read more to find out how TMAO levels may affect health and what factors may lower its levels.

TMA is generated by gut bacteria when they metabolize choline, lecithin (phosphatidylcholine), and L-carnitine [2, 3].

TMA is then transferred via the bloodstream to the liver where it becomes oxidized into TMAO, primarily by the enzyme FMO3 [4].

Potential foods that increase TMAO are those rich in choline, lecithin, and L-carnitine, like red meat, eggs, dairy, and saltwater fish [5].

You can check your TMAO levels with a blood test. However, the test is relatively new and the referent values are still being established.

And remember that a single test isn’t enough to make a diagnosis. Your doctor will interpret this test, taking into account your medical history and other tests. A result that is slightly low/high may not be of medical significance, as this test often varies from day to day and from person to person.

The conditions we discuss here are commonly associated with high TMAO. Because their association has been investigated in cohort studies, this doesn’t necessarily mean that high TMAO levels actually cause these conditions.

Work with your doctor to discover what underlying condition might be causing high TMAO levels and to develop an appropriate plan to improve your health.

In a meta-analysis of 19 studies with almost 20,000 people, high TMAO levels were associated with increased rates of cardiovascular diseases, such as heart failure and stroke. Furthermore, people consuming higher levels of TMAO precursors, like L-carnitine and choline, were 1.4 times more likely to suffer from heart failure, stroke, or other heart diseases [7].

In another meta-analysis of 11 studies with around 7,700 subjects, those with elevated levels of oxidized TMA had a 23% higher risk of heart disease and a 55% higher risk of dying (from all causes) [8].

According to a study of 81k women and 39k men, a higher intake of dietary phosphatidylcholine (source of TMAO) resulted in a higher all-cause death, especially among diabetics [9].

However, the study is limited because it did not assess the gut microbiota and gut health among diabetics versus healthy subjects, which is typically poor in comparison. In general, phosphatidylcholine is known to be a beneficial compound to consume, so more research is needed in the opinion of our medical experts.

High TMAO levels were associated with blood clots, heart attack, and stroke in over 4,000 people [10].

Similarly, high levels of this compound were associated with increased mortality in 720 patients with heart failure [11].

In rats, TMAO increases with age and causes oxidative stress and inflammation in blood vessels, leading to endothelial (blood vessel lining) dysfunction, which increases the risk of heart disease [12].

High levels of TMAO were associated with increased cIMT (carotid intima-media thickness), an early marker for hardening of the arteries (atherosclerosis), in 220 people irrespective of other factors, such as insulin resistance, obesity, and fatty liver [13].

Elevated levels of this compound were also associated with higher rates of artery hardening in 220 people with chronic kidney disease [14].

Dietary TMAO precursors such as L-carnitine and choline increased artery hardening in atherosclerosis-prone mice. The effect was blocked by antibiotics, which decreased the activity of gut bacteria [15, 16].

Of 191 heart disease patients, those with high TMAO were more likely to have diabetes [19].

High levels of this compound were also associated with worse kidney function and advanced chronic kidney disease in 227 patients with heart disease [22].

In another study, high TMAO levels, caused by a high-fat diet, increased oxidative stress and inflammation in the kidneys and lead to kidney damage and dysfunction in mice [23].

High TMAO levels were associated with higher levels of TNF-alpha, an inflammatory cytokine, but not with IL-6 or CRP, in 271 adults [24].

However, high TMAO was associated with chronic inflammation and high IL-6 and CRP levels in 179 patients with kidney disease [21].

A diet higher in cow’s dairy was associated with higher TMAO and inflammation [24].

This compound increased inflammation by increasing NF-κB (a master regulator of inflammation) in mice [25].

TMAO contributes to the production of N-Nitroso compounds (NOCs). These products can cause DNA-damage and potentially cancer [27, 28].

In a study on 1,670 women, there was a link between higher TMAO and colon cancer. High levels of choline, the source of TMAO, were associated with a 2.4-times greater incidence of the disease [29].

However, in another study on almost 1,300 men, only elevated choline but not TMAO was associated with an increased risk of colon cancer [31].

In a study on over 1,600 adults, high TMAO levels were associated with more severe liver damage and non-alcoholic fatty liver disease [33].

Also, high levels were associated with worse outcomes in people with primary sclerosing cholangitis, an immune-related disease of the liver [34].

A high conversion rate of choline into methylamines, such as TMAO, decreased choline levels and causes fatty liver disease in mice [35].

Factors That May Increase TMAO Levels

Eggs, red meat, dairy products, and fish are rich in choline, carnitine, and lecithin, which then get converted to TMAO by gut bacteria [5].

In 40 healthy young men, fish consumption increased TMAO levels more than beef or eggs. However, this response correlated with the presence of specific gut microbes that are found in people with supposedly less healthy gut microbiota [39, 39].

Fish protein increased TMAO in mice more than other protein sources such as soy or casein [40].

However, another study on 38 healthy people showed that the intake of up to three eggs per day did not increase TMAO levels, but had beneficial effects such as increasing HDL–cholesterol and choline [44].

Dairy consumption was associated with higher TMAO levels in 271 adults [24].

On the contrary, in 38 overweight or obese women, increased consumption of dairy resulted in lower TMAO levels [45].

Should you stay away from fish and animal products because these can increase TMAO? The answer is not simple.

Many studies show that consuming fish lowers the risk of heart disease. Fish is also an excellent source of omega-3 fatty acids [46, 47].

It seems that the benefits of other healthy ingredients found in fish outweigh the effect of higher TMAO, at least when it comes to heart disease prevention.

Diets rich in choline or carnitine also have beneficial effects on human health. These foods are important sources of nutrients, such as iron and vitamin B12 [47].

Therefore, you should take the studies above with a grain of salt and always discuss any dietary interventions with your doctor

A short-term high-fat diet increased TMAO levels during or after meals but did not have long-term effects in 10 non-obese men [48].

L-carnitine supplements can also increase TMAO levels in people with organic acidemias (these are rare inherited inborn errors of metabolism), irrespective of meat consumption. However, these studies are small and need much more follow up work before any conclusions are drawn from it [50].

However, gastric bypass surgery decreases overall heart disease risk, so the impact of high TMAO in these cases is still not understood [52].

Factors That May Decrease TMAO levels

If your TMAO levels are too low or you want to prevent the potential negative effects of their high levels, discuss with your doctor what strategies may help you raise them. Never implement them in place of what your doctor recommends or prescribes.

Some lifestyle interventions that may help increase TMAO levels include:

Among 74 subjects given L-carnitine, meat-eaters had greater increases in TMAO levels compared to vegans or vegetarians. This means that vegans and vegetarians have gut bacteria that produce less TMAO [56].

In another study on over 150 people, vegetarians, vegans, and those who adhered to a Mediterranean diet (rich in fruit, legumes, and vegetables) had lower TMAO levels [57].

In a small study on 52 adults, supplementation with vitamins B and D decreased TMAO levels [58].

Probiotics are bacteria that, when digested, have beneficial effects. Prebiotics are plant fibers that act as fertilizers for the growth of the good bacteria in the gut.

Soluble dietary fiber, acting as a prebiotic, reduced TMAO by over 60% in mice fed red meat [61].

In another study in mice, a single type of prebiotics increased, whereas a prebiotic mixture decreased TMAO levels [62].

This suggests that having a high diversity of gut bacteria is important for controlling TMAO levels.

In human studies, conventional probiotics were unsuccessful in decreasing TMAO [63, 64].

However, the bacterium Enterobacter aerogenes, given as a probiotic, decreased TMAO levels in mice [65].

Resveratrol, found in berries and grapes, decreased blood TMAO levels in atherosclerosis-prone mice. Future clinical studies are needed before any conclusions can be drawn from this [66].

Meldonium is an anti-ischemic medication that increases blood flow and oxygen supply to the body.

This drug decreased blood TMAO levels in eight healthy adults on TMA-rich diets by increasing the elimination of TMAO through urine [68].

In rats, meldonium reduces the production of TMA from L-carnitine and, thus, decreases TMAO levels. Twenty-four hours after meldonium treatment, the TMAO levels in urine were 3.6 times lower [69].

Note that this drug is only marketed in some Eastern European countries. It is currently unscheduled in the US and included in the World Anti-Doping Agency list of substances banned from use by athletes. Meldonium may help you lower your blood TMAO levels if you are already on this medication, but never start taking it or increase your dose for this reason. Always follow the treatment plan prescribed by your doctor.