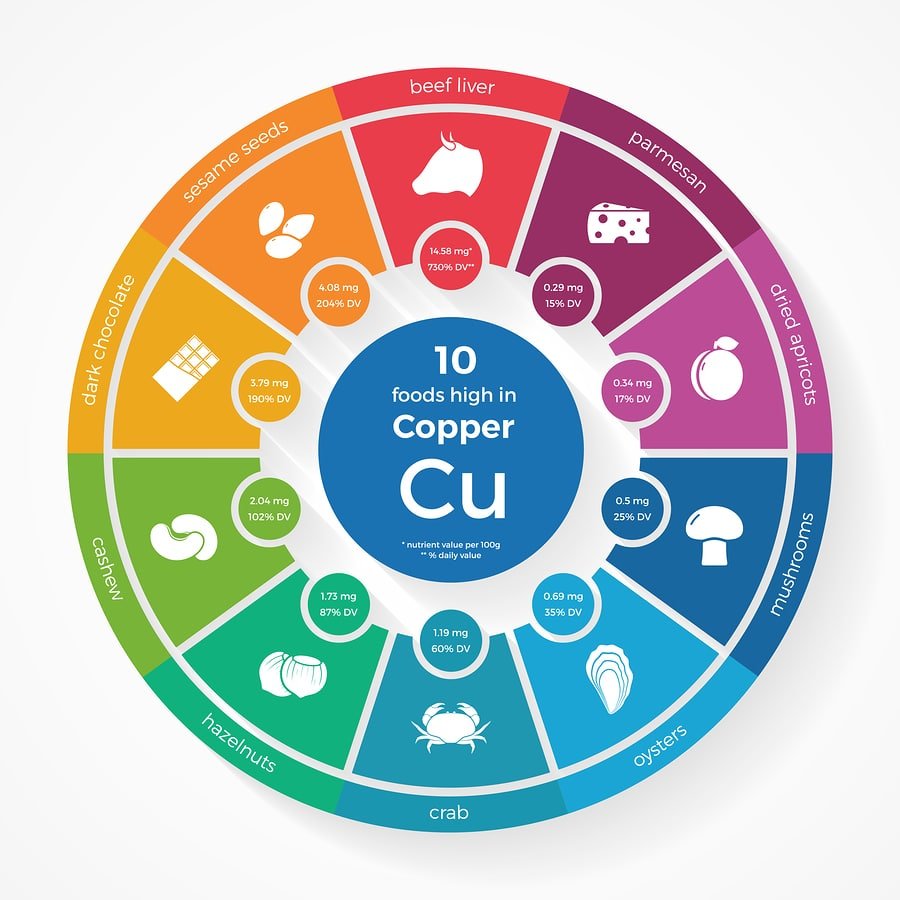 Copper is an important trace mineral. We need it for normal growth, bone strength, immune function, and cardiovascular health. However, too much of it can be toxic. Read this post to learn more about the health benefits of copper, food sources, harmful effects of copper overload, and ways to change copper absorption.

Copper Roles in the Body

Copper (Cu) is an essential trace mineral in the human body. It is required for growth, bone strength, immune function, as well as heart function, and brain development [1, 2].

Copper is an integral part (cofactor) of a group of enzymes called cuproenzymes, which are important for [3]:

Due to its potent antimicrobial properties, copper is also used as a biocide in agriculture, wood preservation, paints, and in hospitals [8, 9, 10, 11].

Oral or intravenous copper is effective for copper deficiency, which may cause anemia, heart disease, bone deformations, and more. Copper deficiency is rare and usually limited to people receiving parenteral (intravenous) nutrition [12, 13].

Copper-impregnated socks, due to Cu antimicrobial and antifungal properties, were effective against athlete’s foot infections (tinea pedis) in a trial of 56 patients [24].

Copper-impregnated socks may also be used to prevent skin infection, cuts, and wounds that often lead to hard to treat ulcers in diabetic patients [25].

According to two studies of 118 volunteers, sleeping on copper oxide-containing pillowcases can reduce fine wrinkles and cause an overall improvement of skin appearance [26, 27].

A supplement containing copper (1-4 tablets daily for 8 weeks) reduces inflammation and improved skin appearance in 257 patients with inflammatory acne vulgaris. However, this study lacked a control group, which makes the results questionable [28].

Cooper used in wound dressings can help enhance wound healing by increasing skin regeneration and the formation of new blood vessels. In addition, the copper in wound dressings has potent antimicrobial properties, which can reduce the risk of wound contamination [8, 29].

These copper oxide products are non-irritating and safe to use both on intact and damaged skin [30].

It is a cofactor for enzyme lysyl oxidase required for the formation of strong bones [32, 33].

In 73 menopausal women, 3 mg/day of copper supplementation for two years slowed down the loss of bone mineral density that typically accompanies menopause [34].

Additionally, a study in 59 postmenopausal women found that taking a combination of supplemental calcium and trace minerals, including copper, might slow down bone loss. However, the contribution of copper to these effects is not clear [35].

No valid clinical evidence supports the use of copper supplements for any of the conditions in this section. Below is a summary of up-to-date animal studies, cell-based research, or low-quality clinical trials which should spark further investigation. However, you shouldn’t interpret them as supportive of any health benefit.

Copper is essential for the strength and integrity of the heart and blood vessels. Copper supplementation improves altered heart function and promotes the regression of heart enlargement caused by copper deficiency [16, 17, 18, 19, 20, 21].

In 16 healthy young women, copper supplementation (6mg daily for 4 weeks) led to a 30% reduction in plasminogen activator inhibitor-1 (PAI-1), thus potentially decreasing the risk for atherosclerosis. However, it didn’t have an apparent effect on other risk factors for heart disease [36, 37].

A clinical study confirmed these findings in 73 patients, of which 28 were copper-deficient [39].

Scientists observed the potential of copper supplementation to prevent atherosclerosis in one study on rabbits [40].

In a study of 33 volunteers, copper supplementation increased secretion of cytokine IL-2 but only in people with normal-low ceruloplasmin (a major copper-carrying protein). It didn’t impact the inflammation-causing cytokine TNF-alpha [41].

Interestingly, workers exposed to copper salts did not develop cholera during the cholera epidemics in the 19th century [42].

Copper supplementation during pregnancy (1g/day) significantly reduced the symptoms of depression and anxiety in a study of 238 pregnant women. Further research is warranted [44].

On the other hand, some patients with depression have higher levels of blood copper [45, 46].

Further research should cast more light on the conflicting effects of copper on mental health.

Copper supplementation had no beneficial effects on cognition in a study of 68 patients with Alzheimer’s disease [49].

According to a meta-analysis of 27 clinical trials (over 3,500 subjects), Alzheimer’s disease patients have significantly higher copper levels in the blood, compared to healthy controls [50].

The Bad: Copper Excess and Overload

Copper toxicity occurs with the ingestion of copper compounds usually with suicidal intent, or with accidental consumption of copper-contaminated foods, or water.

Ingestion of more than 1 g of copper can cause copper toxicity. However, this is only a rough threshold for toxicity and depends on individual factors [69].

The long-term copper toxicity is not frequent in individuals who do not have inherited disorders of copper metabolism.

Copper supplementation should not be used in individuals with genetic disorders affecting copper metabolism:

Copper supplementation in adequate doses is likely safe for healthy individuals, including children and pregnant women. Make sure not to exceed the safe upper limit of 10 mg/day [76].

Copper levels are a marker of antioxidant status and overall health. Low or high levels don’t necessarily indicate a problem if there are no symptoms or if your doctor tells you not to worry about it.

Increased copper levels may increase the production of free radicals which results in cell and tissue damage [77, 78].

Copper is thought to contribute to AD since alterations in copper levels tend to precede symptoms of AD in some, but not all patients [79].

Copper seems to be associated with worsening of symptoms and may have a causative role, suggesting that the elderly may benefit from reducing copper intake from food and supplements [84, 85, 86].

One study has shown that copper is a component of the amyloid-beta plaques which are found in the brains of people with AD [87].

Occupational studies showed that long-term exposure to copper and manganese increases the risk of Parkinson’s disease [88].

Free copper has the ability to produce free radicals, and increase Lewy body formation, the hallmark of Parkinson’s disease [89].

According to preliminary research, excessive copper and ceruloplasmin levels may be associated with an increased risk of heart disease [57, 58].

Blood copper levels are significantly increased in some type 1 and 2 diabetic patients [92].

Copper is involved in the production of free radicals that play an important role in the development of diabetic complications [93, 94].

Copper may also be obtained from drinking water from copper pipes. The U.S. Environmental Protection Agency allows up to 1.3 mg/L of copper in human drinking water [98, 99].

The average intake of copper from food in the United States is approximately 1.0 to 1.6 mg/day for adult men and women.

The Tolerable Upper Intake Level, the highest level of daily nutrient intake that is likely to pose no risk of adverse health effects for almost all individuals, for adults is 10 mg/day [100].

A number of copper supplements are available in the form of oxide, chloride, gluconate, sulfate, and amino acid chelates [101].

Although copper is essential to health, supplementation is unnecessary for most healthy individuals [102].

L-histidine and L-cysteine can reduce copper absorption while glycine, L-tryptophan, and L-methionine increase it [105, 106].

Copper deficiency has been reported in humans using up to 600 mg elemental zinc daily or excessive usage of zinc-based dental adhesives [107, 108, 109].

Copper absorption may be influenced by the type of carbohydrate consumed.

Excessive dietary intake of molybdenum may form complexes with copper and can induce deficiency [115].

Causes of Low / High Hemoglobin Levels & How to Improve